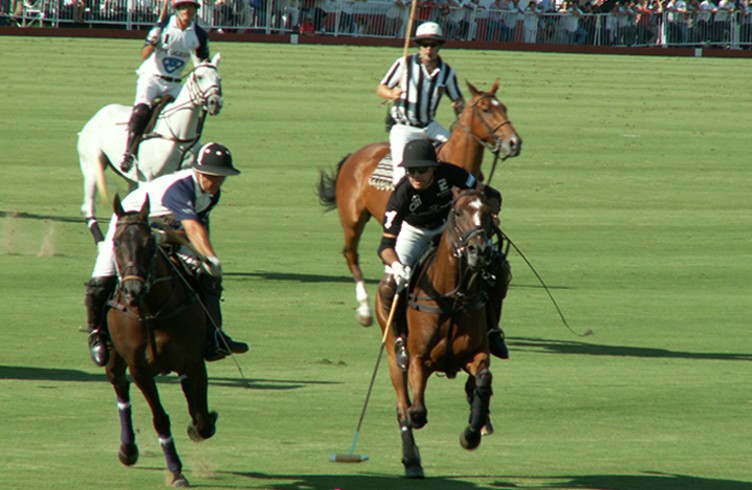 Reflections is a critique of the malaise which now afflicts polo at its peak, the high-goal Argentine game, coupled with a truckload of proposals to change the rules (or return to existing rules, since abandoned, as played before patron polo took hold) to recover the magic which Tanoira insists the game has lost.

He brings impressive credentials to his task. Born in 1971, at 15 he was introduced by Gonzalo Pieres to the professional game, playing with White Birch at Palm Beach. He won the Rolex Gold Cup with Revlon in 1992, contested the Argentine Open in 2000 and 2001 with brief bouts of polo in India, Morocco, Germany and Australia. A seven-goaler at his peak and now 38, he confronts modern polo not as an aging warrior nostalgic for the glory days long gone but as a peer of those who dominate the high-goal game today.

Equally impressive is his lineage: the son of Luisa nee Miguens, architect and author of Passion & Glory: A Century of Argentine Polo (2009) and of Gonzalo Tanoira who died in 2004 while President of the Argentine Polo Association (AAP) and is recalled as one of the foremost 10-goalers of his era. In 2003, insisting he no longer enjoyed it, Javier retired from the professional game, and since his father’s death has managed the Tanoira family’s Polo Argentino stud, confining his own polo to practice chukkas with family and friends. “It’s much more fun,” he says. “Believe me.”

To those who believe polo has changed for the worse, Reflections is mandatory reading. In some 90 pages, more than 25,000 words, he argues the case for radical reform to save polo from eventual oblivion. His treatise combines clarity of purpose and thorough research with an impassioned appeal to the Argentine polo community for support. In its English version, Reflections is well served by Sharon Chavanne, a professional translator and stepmother of high-goaler Santiago Chavanne, Javier’s brother-in-law. Witness its concluding paragraph:
In this country, which suffers…from chronic economic and political instability through its corruption; grants in exchange for votes; mistakes in governmental agriculture and livestock policies; its infinite poverty spread out over all the National Territory; we have gold dust in our hands in an activity that is solid and from which many families derive a livelihood and at which we are, undoubtedly, the best in the world. But we didn’t create that; we inherited it from our parents; grandparents and all the polo lovers who are no longer with us. It is my belief that it is our duty to preserve it; to look after it, each one from his own place, doing the best we can do, so that Polo Argentino continues to be the best polo in the world for a very long time to go. Thank you for your time; I embrace you all.

I was a polo journalist resident in Buenos Aires for four years, during which I interviewed former and current high-goal players for their thoughts on how polo had changed for good or ill. In Tanoira’s conclusions, drawing on scores of interviews with players past and present, breeders, umpires, and officials, I recognise clear echoes mine, while accepting that he brings an insider’s grasp of the issues far beyond my own.

For Tanoira as for senior AAP figures, the final of the 2008 Argentine Open, La Dolfina versus Ellerstina, was an epiphany, confronted as they were by the spectacle of high-goal Argentine polo in meltdown. In Tanoira’s words, “…a cut-up [broken], slow game; fouls galore…I became aware that players found that they were more efficient when forcing a slow game in which being in possession of the ball and not passing it, was the key, and by scoring through penalties.”

Are the umpires to blame, as so many polo aficionados insist? No, he says. “It is the players who determine what should be called and what not, and that is not right. It is the Argentine Polo Association that should establish the criteria…” Starting in the late 1970s, it seems Eduardo Moore started the fashion of appealing against nearside opponents challenging him, entirely legally, for possession of the ball. He continues:
“Nowadays it is almost impossible to see good refereeing because it is also impossible to watch a good match. The umpires have to be looking attentively not at the two or three players going towards the ball, but at the one who has the ball; the one who marks him; the one who blocks him; the one who counter-blocks him; the one coming up from behind; the one who attempts to block the one coming up from behind. This is the typical play we are likely to see: a gallop with five or six players heaped together in less than 24 square yards; one has the ball and he touches it with strokes that are not longer than 60 inches, and all the rest are playing each other off with their sticks raised. How can we expect the umpire to do a good job?”

As with so many others, Tanoira’s pleasure in watching polo is marred whistle-blowing so frequent as to reduce games to penalty shoot-outs. In the past 25 years it seems penalties have increased by 40 per cent. The melees following throw-ins account for 20 per cent of all whistles. Tanoira argues that if possession of the ball was awarded against those hitting it out of play, and if the team against whom a goal was scored was awarded the ball to hit its back-line in lieu of the mid-field throw-in, that umpires’ throw-ins would fall by 95 per cent.

Space does not allow me address all Tanoira’s quarrels at what polo has become, nor his remedies, some of which the AAP and the Hurlingham Polo Association have recently adopted. Others suggestions, such as the idea of players in the Argentine high-goal season being limited to a proscribed number of ponies (a dozen, for example), identified and non-replaceable, to encourage players to conserve their horses by playing the team game, have as much chance of adoption as the proverbial snowflake in hell.

Tanoira rightly identifies the most formidable obstacle to saving polo from itself as the polo community’s innate distrust of change. He proposes that the AAP’s Rules of The Game Sub-Committee, comprising a dozen former players, mostly former 10-goalers and victors in the Argentine Open, be empowered to draft changes to the rules.

As a role model, he cites the Rules’ Committee of Rugby Union, the British code of football whose governing body, the International Rugby Board (IRB), representing nearly 100 national rugby associations, grossed $150 million from its last World Rugby Cup in 2003. “The rugby boom worldwide as a spectacle coincided with the work done by this committee,” Tanoira explains. “The European rugby leagues are broadcast live by the most important sports channels, and the IRB and its associations receive enormous amounts of money.

“But the television channels put pressure on them at the same time: they want a good show, and everyone in the rugby world understands that quite clearly. It is as a result of this that the rules’ committee is dynamic, because as soon as they impose a rule, the players find a way to get around it. Or to put it differently, they try to squeeze the maximum efficiency possible from it, which is very often detrimental to the quality of the game.

“But this exercise of continual change–which in rugby is not only considered a good thing but occurs naturally as well–in polo would appear to be somewhat traumatic, perhaps fostered by this conservative stigma prevalent in the polo environment. I insist: there are times when one must change to preserve, and I think this is one of them.”