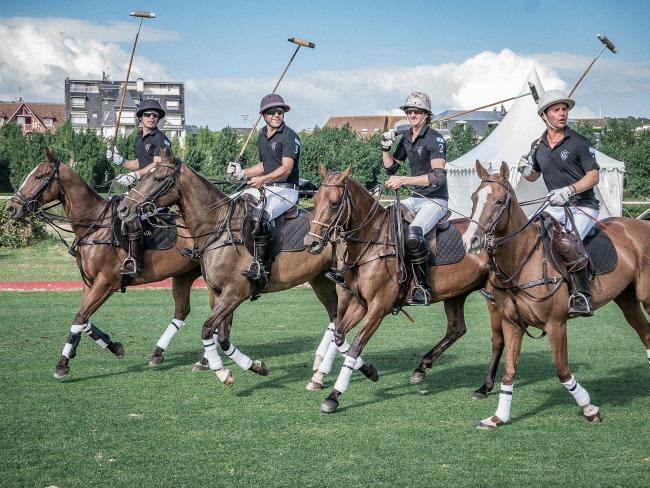 More than 800 spectators were present in the heart of the Touques racecourse on Sunday afternoon to watch the Silver Cup final. It was a final worthy of the quality of the tournament. This 2017 Silver Cup was undoubtedly the finest of the last ten years: four outstanding teams, very close in sporting terms to one another, with top players who are features of the Argentine season. And even if Cibao La Pampa proved to be the strongest today, winning this Silver Cup for the first time, the quality of the game displayed on this beautiful Normandy pitch, was just as much due to the opponent of the day. Yes, Deauville has truly reconnected with its glorious past.

Face to face, two of the best players in the world. On the Cibao La Pampa side, Francisco Elizalde, double winner of the Copa Camara in Buenos Aires and former member of the Indios Chapaleufù II, mythical team of the Argentine Open (four titles to its credit). On the La Esperanza side, Tito Guinazu, quarter finalist in the 2016 Argentine Open and qualified for the next edition. To support the latter: the French team player, Pierre Henri Ngoumou and the young Argentine 4 goal handicap and implacable defender, Ramiro Zavaleta. For Cibao La Pampa, Elizalde could rely on his three compatriots: Patricio Cieza and the two brothers Juan and Jorge Pepa. The latter, captain, and his counterpart, Jean-Édouard Mazery – president of the International Polo Club of Deauville moreover showed themselves to be particularly skilled in defense.

It was Fran Elizalde who, just in the seventh minute of the first chukka, opened the score for Cibao La Pampa. In short, a game that took a while to start. The markings were severe and the attackers had little opportunity to display their talent. Tito Guinazu, the pillar of La Esperanza, was particularly “stifled” by his four opponents. No one let him go unmarked so much so that he was unable to score a goal! It was La Esperanza’s back, the defender, who finally opened the score for his team in the third chukka with a magnificent goal, shot under the neck, 50 meters from the posts. Spectacular, but still insufficient even though Cibao La Pampa led only 3 to 1 at that time. A score that did not move in the fourth chukka. It was finally in the last chukka that the match was settled, first with a goal by the captain Juan Pepa followed by another from Francisco Elizaldeon which Guinazu took a yellow card, doubled by a penalty at 60 metres that Elizalde did not fail to transform. Patricio Cieza further worsened the score that the captain of La Esperanza, Jean-Édouard Mazery, managed to narrow: 7 – 2, final score. Man of the match Francisco Elizaldewas delighted with his first victory at Deauville, although it was a bit difficult to get into the game: “Both teams were a bit nervous. We knew our levels were very close and it was only when we increased the gap during the last chukka that we relaxed and were able to score more goals. ” Now the objective of this magnificent team is a double with the Gold Cup which starts Tuesday or even a triple: “We are also planning to participate in the Open de France in Chantilly”. In short, a French Triple Crown before the Argentine season, and in particular L’Abierto, in which Francisco Elizalde will participate for the Abu Dhabi team.

La Folie Douce for the ladies
The day before, Saturday 12, the final of the ladies tournament was played. A Deauville Ladies Polo Cup which develops year after year following the growth of this sport for ladies: two more teams than in 2016, six in total, participated in the competition. The only two 100% French teams played against each other in this 2017 final: the Roses for Brok Café (Wendy Falourd, Charlotte Garaud, April Kent and Candice de Montrichard) and the Bleues for La Folie Douce (Romane Jamet, Léa Siboni, Laetitia Macaire and Lavinia Fabre). This latter team was probably a little more homogeneous with four players complementing each other very well, very tough in defense. Léa Siboni, who was a member of the French team crowned as European vice-champion in May in Chantilly, has progressed enormously, scoring the goal break and young Romane Jamet, only 14 years old (which deprived her of the champagne bottle at the awards ceremony!), was particularly brilliant, scoring the fourth goal that confirmed the result (4-1). She was named best player in the final, but this victory was above all that of a team built around the experience of Laetitia Macaire and Lavinia Fabre (who scored two penalties) who play together at Chantilly.

Continuation of the Barrière Polo Cup in crescendo
This first fortnight, as noted, was exceptional (both on the field and off the field with a most convivial atmosphere). But the tournament is still not finished. The rest of the month promises to be even more competitive with the entry of three new teams for the Gold Cup: Talandracas, title holder, with another champion from the Argentine Open, Sapo Caset; Mungo, with the French n°1 player, Brieuc Rigaux and Mochi Chic which will recover Tito Guinazu. The Gold Cup is one of the most coveted titles of the international circuit.

The Bronze Cup with eight teams, starts on Monday, with some games “delocalized” to the charming grounds of the Dozulé racecourse. Players of the teams of France will play alongside Argentinian professionals. In short, the remainder of the tournament promises to be even better. Deauville is the place to be for enthusiasts of the oldest team sport, and the place to end August for lovers of horses and polo.