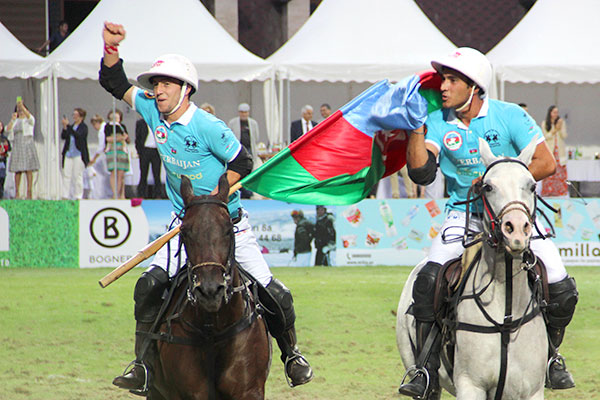 Hamburg (POLO+10 – 19/08/2016) – Four years ago the unique sport of polo was brought back to one of its origin countries, where the traditional polo version Shovgan was played over the centuries. Thanks to the pioneers and visionaries of a new polo era in their country, General Elcin Gulijev President of ARAF and Mr. Manuchehr Ahadpur Khangah, the modern sport of polo was raised from zero to a remarkable international level in Azerbaijan during the last four years. After hosting the first ever FIP Arena Polo European Championship in 2015, the ARAF-Elite Horse & Polo Club now presents the 4th CBC Sport Arena Polo World Cup from 9-11 September 2016.

Mr. Bahruz Nabijev of the Equestrian Federation of Azerbaijan Republic (ARAF) organises this international arena polo tournament together with World Polo of Reto Gaudenzi and his team. This year four club teams are competing for victory. Both, the European Champions from Azerbaijan and the Vice Champion from Germany, including Patrick Maleitzke, are taking part in the tournament again.

With CBC Sport a great title sponsor features the polo venue and provides a live coverage of the matches on the Azeri TV. Official Supplier is again the world-renowned polo fashion brand La Martina from Argentina. The team sponsors Badrutt’s Palace, Bogner, Gilan Holding and Italdizain Group are presenting strong teams with professional and amateur players from Azerbaijan, Switzerland, Argentina, Spain and Germany. The teams can resort to 100 excellent polo ponies from Argentina (80) and the local region Karabah (20).

This year the legendary hotel Badrutt’s Palace from St. Moritz/Switzerland will be in charge of the excellent VIP Catering together with a local caterer from Elite Horse & Polo Club. Reto Gaudenzi, who has been appointed by General Elcin Guliyev (President ARAF) as the official representative of ARAF for international polo relations, wants to bring together two unique polo locations: Baku and St. Moritz. The “Baku Moritz Night” will be the social highlight of the whole polo venue. Reto Gaudenzi: “We will stage this glamorous and traditional Baku Moritz Night on Saturday, 10th September. Some tickets are still available.”

In December, Azerbaijan will apply for the FIP Polo European Championship 2018. Therefore two full-size grass polo fields will be being build in Azerbaijan. Unforgettable polo days are coming ahead. And the vibrant city of Baku is getting ready to welcome the international guests and audience.

About polo in Azerbaijan:
Azerbaijan is known as the birthplace of polo and in 2013, the sport returned to Baku with the Grass Arena Polo World Cup Azerbaijan. In the past three years World Polo organised three successful polo events in the Azerbaijani capital, under the direction of Reto Gaudenzi and in cooperation with the Equestrian Federation of Azerbaijan Republic (ARAF) and the Elite Horse and Polo Club Bina. Following the huge success of the first two years, Baku was last year scene for the first ever FIP Arena Polo European Championship. 2018 the vibrant city applies for the European Championship in grass polo.