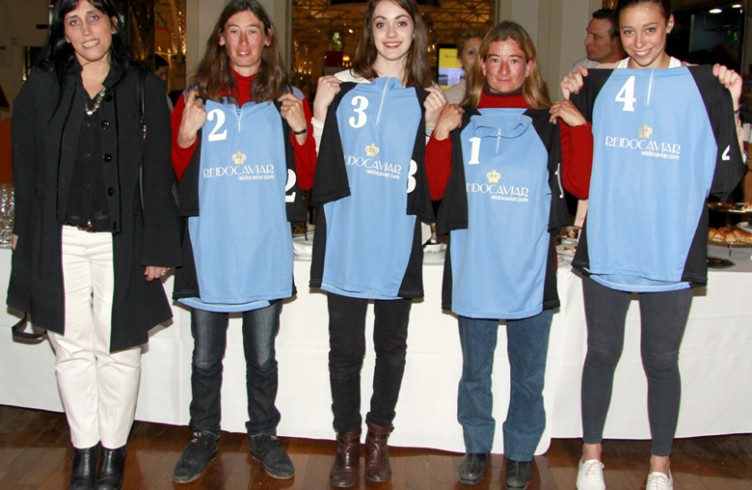 There can’t be too many family-run polo operations in Argentina  like this one. Chris Ashton visits a unique estancia, run entirely by  a family of four sisters whose surname sounds remarkably English.

Forty-ﬁve miles south of Buenos Aires in lush pampas pastures, flat as an ironing board, is a 50ha block called Ipona. Once a family dairy farm, for the last past ten years it has been hosting successive generations of three or four-year-old horses – anything from racetrack discards to estancia stock horses – selected for their temper and physical aptitudes as potential polo ponies. They are trained for a year or two and then introduced to polo, after which they’re sold into the polo community.

So what’s new? Argentina is awash with farms focused on breeding or ‘making’ polo ponies, gleefully popping up in response to the worldwide explosion of polo. According to the Federation of International Polo, Polo playing countries have doubled in number from 40 to 80 in juste 10 years. The global growth in the popularity of the sport coupled with the traditional Argentine dominance in the supply of polo-related products and services to the polo world (and an under-valued currency) has contributed to the huge number of polo breeders and producers in Argentina.
What sets Ipona apart from the opposition is that its workforce consists of four sisters, all in their late 20s to late 30s. Without hired help, they do it all – from mowing the polo ground and cutting halters from untreated cattle hide to playing as a low-goal team. What’s even more unusual is that on their father’s side they’re of English descent and carry the name of Gedge.

The Gedge sisters are descended from the Vikings who invaded England 1,000 years ago, settling in Old Buckenham, Norfolk. Their paternal great-grandfather, a solicitor, went to Hong Kong where he was appointed a judge. He embraced the Cantonese culture, so much so as to ear the nickname among his British peers of “Chinese” Gedge.

His only son, Herbert Johnson Gedge, was educated at Marlborough College and Sandhurst, and served with the 18th Hussars on the Western Front, where he was seconded to aerial reconnaissance of enemy targets for British artillery. Resigning his commission in 1924, he migrated to Argentina at the age of 26. A year later, he bought Ipona.  Determined to integrate himself with local society, he engaged a language coach – one Maria Inez Romero Garranza, daughter of an illustrious family of Spanish descent – to whom he then became engaged. Spanish was the mother tongue of their son Richard (now 70) who turn married another Latina, Maria Laura, of French-Italian descent. Richard’s wife died six years ago.

Underlining their debt to their maternal forebears, nothing in the Gedge sisters’ appearance hints at their Anglo-Viking origins – except in the case of Cristina, who doubles as team captain and manager. Spanish is their first language, with English (in varying degrees of fluency from one sister to another) coming a poor second.

Their father’s support in the business has been pivotal. He put the family farm at their disposal and showed them how to drive the tractor and sink post-holes. Now he manages the accounts and ferries the grandchildren to and from pre-school. He cheerfully admits that horses have never been his thing (confessing that to him they all look the same), but he has always had his own consuming passion, having held a pilot’s licence for 45 years. From the Ipona airstrip, he takes his small grandshon for weekly spins in his single-engined Colt.

Richard’s love affair with manned flight is also expressed in his interest in meticulously hand-crafted model aeroplanes, some with miniature engines for flight. His early obsession with fighters and bombers has since yielded to a pilot’s preference for civilian aircraft; in particular small, single-engined planes. In the business of making and trading polo ponies, the Gedge sisters serve the lowest rung of the market. Their strength, in bringing horses into the game, is their endless patience and a commitment to gentle persuasion, as opposed to breaking the spirit or consistently applying the threat of punishment. Whips and spurs have no place in their repertoire.

However, what they lack in this fiercely competitive market is the know-how and wherewithal to secure the best prices for their value-added six and seven-years-olds. Their sale price is typically around US$3,000. The horses are sold to polo clubs in the Pilar area and to dealers with access to wider markets and, thus, wider profit margins – courtesy of the foreign buyers who happily pay double or triple what the local market will bear.

The most dazzling feather in the sisters’ cap must be the successful sale of a five-year-old mare, Parasina, three years ago. The mare was sold to the father of the famous Novillo-Astrada brothers, whose team La Aguada won the coveted Argentine Triple Crown of high-goal polo tournaments in 2003 and remains one of the top six teams in the country.

Help is now at hand, courtesy of clients impressed by the sisters’ approach to their schooling and the quality of the end product.
French-born, Buenos Aires-based entrepreneur and low-goal player Alexis Ruffat is seeking a sponsor for the Gedge sisters’ polo team, Handycup, to bear the cost of floats hired to carry their ponies to tournaments.
His website www.poloconsult.com.ar, which covers tournaments and promotes Argentine polo-related goods to the English and French-speaking markets, features their estancia, Ipona, in the services section.