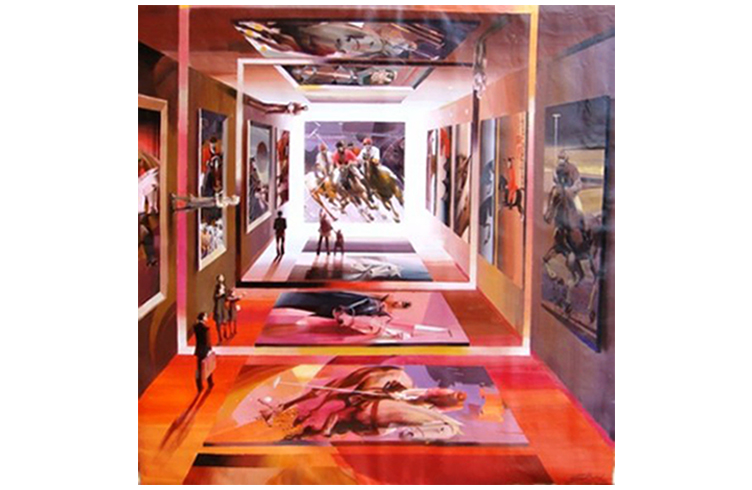 By way of explanation of The World of Polo, which shows several polo paintings encased in one another, Sydney’s Billich Gallery (named after the artist) invites viewers to “step inside the painting…” promising to “introduce you to the origins of polo from China 2000 years ago to the major society sporting event it is today.”

In 2009 when Charles Billich completed the painting (oil paint on canvas, 1000mm. X 900mm, sale price A$45,000, he took it to polo carnivals as far afield as Guards (England), to St Tropez (France), St Moritz (Switzerland) and Windsor (Sydney).

As anyone who has ever painted or sketched a horse can tell you, getting their proportions right is notoriously difficult, and more so for pictures of men and horses at full gallop, a challenge Billich relishes.

“There are no two horses the same,” he explains. “Every horse is an individual, with a physiognomy and gait and personality. The movement of a horse is infinity of sequential variations, with many intermediate leg positions and neck angulations, with many eye expressions, fluttering of nostrils and throbbing of the veins.

“Of the dynamics of an anatomically complex thousand-piece organism of the horse, this is the ultimate challenge of your draftsmanship…It is stimulating to draw from the inexhaustible quarry or image that is the world of racing, polo or other equestrian sports…I feel so useful when I can paint something which the camera has not been able to arrest, and when I sense I have gratified the public, particularly the people who love horses, whether they are directly involved or once-a-year punters.”

Billich’s art is by no means limited to equine themes. He has contributed to every Olympic Games since Atlanta (1996), sometimes as the official artist, as with the 2008 Beijing Olympics. Inspired by 6,000 terracotta tomb warriors and their horses, buried 2,000 years ago adjacent to the tomb of China’s first emperor, sixteen of his warrior paintings, have been reproduced as Chinese postage stamps.

Other sporting bodies to appoint Billich their official artist at different times include yachting, Formula 1 car-racing, golf, karate and assorted codes of football. In 2000 the American Art Sport Museum and Archives, part of the US Sports Academy in Daphne, Alabama, named him Sports Artist of the Year.

Yet he cannot be defined simply as a sporting artist. In a career spanning nearly forty years, the 77-year old Croatian-Australian has painted (and sculpted in precious and semi-precious metals) artworks spanning much of the human drama. Aside from sport they include dance, eroticism, both male and female, myth, religion, ancient times, cityscapes, portraiture (including the first official portrait of Pope Benedict XV1), and epic moments of history, like Humanity United, commissioned by the International Red Cross).

Among public bodies owning Billich artworks are the Vatican, the UN European Headquarters and the International Red Cross Museum (both in Geneva), The White House (Washington), the International Olympic Museum (Lausanne), the Museum of Modern Art (Mobile, Alabama) and the palace of the King of Tonga (South Pacific).

Eschewing abstraction and social-realism, Billich artworks can be variously whimsical or subversive. “I manipulate reality,” he shrugs. “I turn it into some kind of symbolic analysis which works on several levels of meaning. There is a touch of irony in what I paint as there is in all contemporary surreal art…”

Disparate childhood and adolescence experience would shape his adult life.For some details which follow, and the artist’s own words, I am indebted to French author and literary critic Jean-Francois Vernay for his profile of Billich (2010). Born in 1934 in Lovran, then in Italy, later part of Yugoslavia, and now of Croatia, he was the only son of a cosmopolitan family speaking Italian, German, Croatian and Venetian. Following schooling in Rijeka, at 15 he joined the local performing arts company as a ballet dancer, while for an underground magazine writing freelance articles taking to task the Communist regime. He was arrested, convicted and sentenced to ten years’ jail. “My time in prison exposed me to the basic issue of coping with cold and hunger, repression and a total lack of freedom,” he told Vernay.

Two years into his sentence the International Red Cross negotiated the release of the political dissidents, Billich included. “How can anyone appreciate freedom without tasting slavery?” he asked. “I’m grateful to fate.” He was also grateful to fellow prisoners, dissidents like himself but older and more mature, who introduced him to new books, ideas, languages and survival skills, rounding out his education for the adult world.

Designing backdrops for prison plays, Billich’s discovered his vocation. Following release, he enrolled to study art in Salzburg, Austria, until its long winters and the lure of the New World, unburdened by war, took him to Australia. Arriving in Melbourne in 1956, shortly before it hosted the Olympics, brought him work as an interpreter, following which enrolled again to study art and drawing, supporting himself variously as a morgue attendant, cab driver, waiter and sign-writer.

Do not suppose that his critical and commercial success—he is a multi-millionaire—is universally admired. Reflecting Sydney’s visual arts community, its public and private galleries, art schools and commentators, in 1995 art critic and historian John McDonald labeled Billich artworks as “a slippery form of graphic design backed with a high-powered marketing strategy.”

The antipathy he excites in Sydney’s art world reflects complex elements of the Australian psyche (and I write as a fellow Australian), not least the Tall Poppy Syndrome. Tall Poppies are those who succeed in any walk of life—conspicuously excepting sport champions–who must therefore be cut down to size. Add to this the visual arts cognoscenti’s contempt for artworks in a populist style, accessible to ordinary people, in which Billich excels.

What of Billich the man? His self-portrait, Well…It’s a Very Long Story, conjures up a male peacock fanning its tail-feathers, as do the mirror-piece and technicolor dream coats he famously wears to exhibition openings. Vernay quotes him describing himself as “a gentle person and a savage, an idealist and a hedonist.” The author characterizes him as a loner, refusing to limit himself in theme or style. “Painting is the most serene, tranquil and spiritual of callings,” Billich shrugs, “provided you stay away from vernissages [private previews of exhibitions], mainstream galleries, art columns, art competitions, art world scandals, fakes, frauds and conspiracies.”

Pivotal to his commercial and critical success is his wife Christa. Born in Munich, as a young woman determined to make her way in the world, she migrated to Australia where she did so. At their first Charles asked if he might paint her portrait, an invitation that led far beyond oil paint and canvas. “From then on,” wrote Vernay, “Crista, more than any of his former wives—would become his muse and inspire the bulk of his nude paintings.”

Aside from her beauty—she has the high cheekbones and pale-blue eyes of her compatriot, Marlene Dietrich–she was the first of his five wives with a head for business. Alternating between painting portraits for fashionable Melbourne and occasional exhibitions with commercial galleries taking eye-watering commissions, he was a struggling, indigent artist supporting children from previous marriages.

Marrying Crista ushered in regime change. Portraits and commercial galleries gave way to retail shops in smart hotels dedicated solely to Billich artworks and their limited edition prints. Then followed the first Billich Gallery in The Rocks, Sydney’s favorite harborside tourist haunt. Other Billich galleries have since opened in his birthplace, Lovran, and in Beijing.

While Billich’s manic energy is focused on creating artworks and traveling the world, Crista has charge of their marketing and promotion, negotiating deals with public and private galleries, sporting, religious, humanitarian and other interested parties the world over. Art critic McDonald short-changed Billich with his “slippery form of graphic design” put-down, but his other point about the backing of a “high-powered marketing strategy,” was spot on.
Written by Chris Ashton, correspondent to Polo Players’ Edition