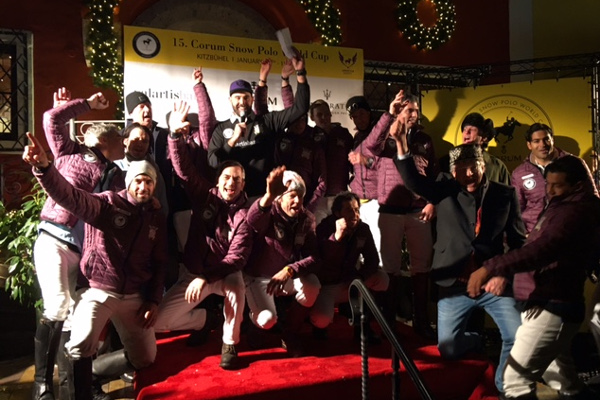 Tradition-rich opening of the 15th CORUM Snow Polo World Cup in front of the “Hotel Zur Tenne” in the heart of Kitzbühel.
Photo: POLO+10 / Stefanie Stüting

Kitzbühel (POLO+10 – 12/01/2017) – On Thursday evening before the three-day CORUM Snow Polo World Cup the international teams were presented as it is tradition and amid loud applause. Furthermore the teams for the matches on the two matchdays on Friday and Saturday were drawn by lot.

The players drove up in the premium-quality cars of team sponsor Maserti and were welcomed and introduced by organiser Tito Gaudenzi. Six top-class teams will play on a daily basis in three matches for the coveted trophy. On Friday and Saturday the matches will start at 12 pm.

Commentator and polo player Jan-Erik Franck looks forward to the matches with great anticipation: “I think that this year the tournament will be especially exciting. The playing level of all teams is very even and extremely high, so we can prepare ourselves for exciting chukkas. Another particularity: This year only one woman, Steffi von Pock of team Bernd Gruber, will attend the tournament, instead of two or three female players as in the past years.”

During the upcoming three days the 15th CORUM Snow Polo World Cup will present top-class moments, not only in sporting terms, but also as a social highlight in the event calendar of the “Gamsstadt” Kitzbühel. Guests from all over the world meet from Friday, 13th January on at the sophisticated winter sports resort. Renowned personalities, celebrities as well as members of important noble houses have announced their attendance at the glamorous Players’ Night on Saturday evening.

We would like to point to the fact, that an accreditation allows access to the VIP tent, but does not automatically include free entrance to the Players’ Night on Saturday evening.