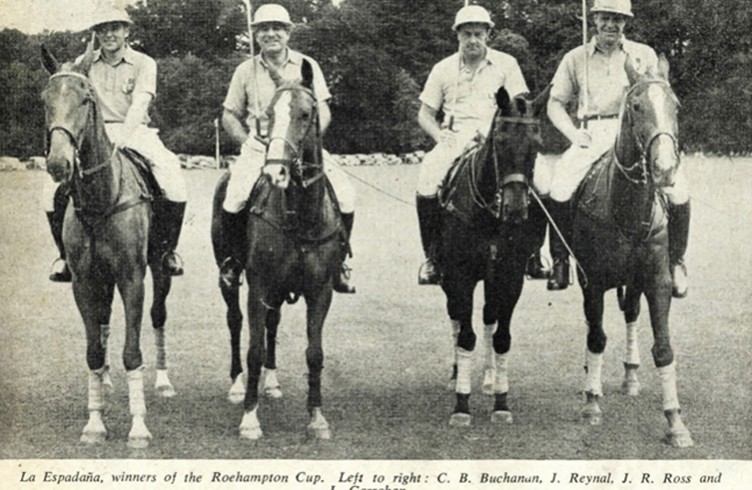 Polo in Ireland is to Argentine polo what a catapult is to a cruise missile. Let the numbers speak for themselves. Argentina has 180 affiliated clubs and nearly 2,000 registered players, with perhaps 1,000 others unregistered. A dozen players hold the maximum ten-goal handicap with scores of others on 9-, 8-, and 7-goal handicaps.

As for Irish polo, the North included, eight clubs boast some 140 players, including those playing in England rather than Ireland. The highest-ranked local player has a 2-goal handicap, augmented by mostly low-goal Argentine professional player-grooms (one with a 5-goal handicap) who last year contributed 18 players. Ireland’s most robust clubs are Bunclody, Wicklow, Waterford and Northern Ireland.
Argentina annually “exports” hundreds of players, polo pony and club managers, even grooms, for anything from three to nine months to clubs all over the world, Ireland included. Since the 1936 Berlin Olympics when Argentine won the gold medal for polo, it has ruled supreme in world polo.

From its genesis in the 1870s the story of Argentine polo is awash with Irish and Anglo-Irish names: Cavanagh, Duggan, MacGuire, Donovan, Ham, Moore, Donnelly, O’Farrell, Morgan, Rooney, Cullen, Shaw, Hearne, Lalor and MacDonald. They include nine players who scaled the pinnacle of polo, the ten-goal handicap, and four teams composed entirely of players claiming Irish ancestry to win the world’s most prestigious polo tournament, the Argentine Open.

Any study of the Irish ingredient in Argentine polo must begin with Juan (“Johnny”) Traill (1882-1958). Born in England of Anglo-Irish parents, his father, the Rev. Robert Traill, ministered to Schull Parish, Co Cork, during the Irish famine. Johnny was just five when the family migrated to Argentina, where his father acquired a 40,000-acre estancia. Playing with his brothers and cousin Joe, he led the North Santa Fe team, winning the River Plate Trophy, precursor to the Argentine Open, in 1904, ’08 and ’13.

Mounted on Traill-bred polo ponies, in 1912 he captained an Argentine team through the English season, after which the Hurlingham Polo Association lifted his handicap from 4 to 9 goals. In 1913 he was promoted to Argentina’s first 10-goaler. At different times he played for Argentina, Ireland and England. Resident in England in the 1920s, he and his sons played as a team called the Traillers). Several of grandchildren, among them a John Traill, and great-grandchildren, play his beloved game to this day.

In its obituary for Juan Diego (“Jack”) Nelson (1894-1964), the Buenos Aires daily La Nacion described him as excelling “in whatever sport he tried: polo, golf, tennis, rowing, cricket, show-jumping, gentleman-rider, athletics.” It seems he declined the captaincy of the national golf team to concentrate on his polo, a game he took up at the unusually advanced age of 23.

He was the son of John Nelson, born into a Co. Kildare a family of shipping merchants. With the advent of refrigerated shipping, Argentine could export beef for the first time to Europe and North America. The family sent John Nelson to open an abattoir in Argentina, where he married into another Irish family, the Duggans, one of whose progeny, Luis, also became a 10-goaler.

Jack’s eye-hand co-ordination, horsemanship and team play coupled with a gift of leadership, whether as a captain or extending teammates beyond their known capacities. Testimony of this is the eight-man, self-mounted squad he led in the 1922 English season, which in varying combinations won virtually every tournament. At the invitation of the US Polo Association, it then crossed the Atlantic to win the US Open.

In the 1924 Paris Olympics Nelson led the Argentine team to its first gold medal in any sport, hitting the winning goal as the final bell rang. For the 1936 Berlin Olympics he served as chef d’ equipe to the Argentine team, and again won gold. In 1928 he inaugurated a Western Hemisphere polo tournament, La Copa de las Americas, and between 1920-37 won the Argentine Open six times.

He was three times President of the Argentine Polo Association. La Nacion’s obituary concluded: “His passion for the sport was matched by a comparable commitment to ranching the wider cause of Argentine agriculture…. He won fame, honour and medals. And due to his easy manner, his human qualities, he had friends everywhere in all walks of life, and was loved and admired.”

In Argentina, as in other New World countries, most Irish migrants brought little more than their personal belongings. The first generation lived barely above subsistence level and married into other Irish immigrant families. Their descendants, not the migrant-settlers, were beneficiaries of their dreams, buying estancias—ranches—and employing gauchos–cowboys of mixed Latino-Argentine-Indian descent–whose horsemanship was, and is, the stuff of legend.

So it was with 24-year old Patrick Garrahan (1805-70) who in 1829 migrated from County Meath to Argentina where he married Anne nee Kenny. Among their nine children was James (1836-88) who married Irish-born Margaret Cunningham. Among their sons Thomas (1864-1936) who married Julia Juana O’Loughlin. In his memoir (dictated to his daughter, Laura, nee Garrahan), Thomas recalls his father and grandfather trading in sheep or cattle, first for other livestock dealers, later on their own behalf.

Living on remote out-stations, growing or slaughtering their sustenance, they leased pasture to establish their own herds. By 1874 Patrick Garrahan’s widow, Anne, could pay two million pesos (worth nearly $100,000 in gold) to a Latino rancher to buy a 4,000-hectare estancia near Lobos in Buenos Aires province. Estancia La Espadana was the Garrahan family seat.

Today within the Argentine polo community, La Espadana is synonymous with the polo club named after the estancia, founded in 1938 by the Garrahans and their cousins the Buchanans. Its teams have won every major trophy in Argentine polo calendar, culminating in six victories, 1994-90 [not 1894] in the Argentine Open. In the last four of these, 1987-90, it played as a 40-goal team, the only one in the world.

Two of the team, Gonzalo and Alfonso Pieres, are descended through their mother from Thomas Garrahan. Whether as a player, strategist or team manager, Gonzalo Pieres was Argentine polo’s most illustrious figure in the last quarter of the 20th century. He won the Argentine Open nine times, and for his polo patrons, American Peter Brant in the 1980s and Australian media magnate Kerry Packer in the 1990s, led teams winning championship trophies all over the rest of the world.

As director and now owner of Ellerstina Polo Club, founded by the late Kerry Packer, through Gonzalo’s sons Facundo and Gonzalito (both 10-goalers in their 20s), together with their MacDonough cousins, Pablo and Matias, he returned Ellerstina to the front rank of Argentine polo, winner of the 2008 Argentine Open. Measured by the prices it commands for its fillies and embryos bred for polo, Ellerstina is the world’s leading polo-pony stud.

Some 300 miles southwest of Buenos Aires, Pieres’ cousin Jorge MacDonough, father of Pablo and Matias, runs another polo-pony stud, La Irenita Embriones. Beyond what ponies his sons require, he annually sells 100-plus unbroken yearlings at an average of $30,000 for fillies and $6,000 for colts, while with his staff of five vets, he annually transfers nearly 1,000 embryos for other polo-pony breeders.

Others cutting a dash in Argentine polo tracing their descent from the Garrahan family include Hector Crotto, born in 1951, winner of several high-goal British and US championships and runner-up in the Argentine Open; Carlos, Diego and Donald Buchanan, who started polo at La Espadana in the 1950s, and successive generations of Garrahans (including Alejandro, Eduardo, Luis, Marcos, Martin, Patricio and Tomas) who started at La Espadana, in several instances rising to 6-to 8-goal handicaps.

Patrick Garrahan migrated from Co. Meath thirty years before the British in India discovered hill-tribe polo, and 40 years before cavalry officers summoned at Aldershot summoned a billiard ball, sundry sticks and clubs and their mounts to try the game in England. The following year, 1870, Anglo-Irishman, John Henry Watson, of County Carlow, played his first game and soon after founded the Carlow Polo Club. In 1873 as the All Ireland Polo Club, it relocated to Dublin’s Phoenix Park, today the oldest polo club in Europe.

Neither Patrick Garrahan, nor his son or grandson, could have foreseen of the impact of their descendants, whether with Irish or Latino surnames, upon the game called The Sport of Princes.