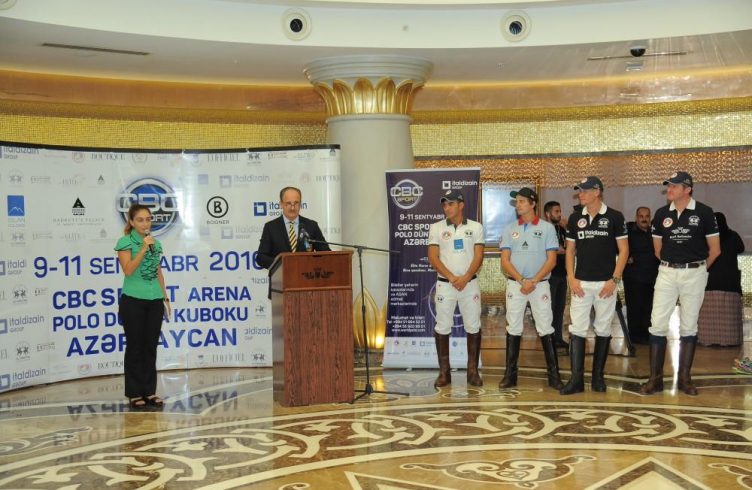 CBC Sport Arena Polo World Cup Azerbaijan will kick off in Baku on September 9 at 18:00.

“This year four club teams are competing for the victory,” Nabiyev said in a press conference held on September 8.

On the last day of the tournament, the races will be held for the third place. The teams can resort to 100 excellent polo ponies including from Argentina (80) and the local region Qarabag (20).

As part of the Polo World Cup, “Baku Moritz Night” Polo Party will be organized.

“For several years, ARAF co-organized the high-level tournament on the polo arena together with the Federation of International Polo (FIP). The modern sport of polo was raised from zero to a remarkable international level in Azerbaijan during the last four years as a result of the efforts of President of ARAF Elchin Guliyev. Last year, Azerbaijan won the first Polo World Cup,” said Nabiyev.

“The first ever FIP Arena Polo European Championship was held in Azerbaijan in 2015,” he said.

Meanwhile, in December, Azerbaijan will apply for the FIP Polo European Championship 2018. Therefore two full-size grass polo fields will be built in Azerbaijan.

First Polo World Cup was held in Baku in 2013 with participation of four teams — from Britain, USA, Argentina and Germany and the second a year later involving four professional teams of Argentina, U.S., Europe and Azerbaijan.

Only a few people know that polo has connection with national Azerbaijani game — Chovgan. It is a reminder of the roots of the original polo sport in Azerbaijan. Four years ago the unique sport of polo was brought back to one of its origin countries and today Azerbaijan hosts several polo competitions.

Chovgan, the original form of the polo sporting game that dates back thousands of years, is still played in Azerbaijan, but the modern version of the sport has not yet managed to gain a foothold in the land on the Caspian Sea.

The game originated in the middle of the first millennium A.D. as a team game. It has been very popular for centuries both in Azerbaijan and Central Asia. Fragments of the game were portrayed from time to time in ancient miniatures, and detailed descriptions and rules of the game were also reflected in ancient manuscripts.