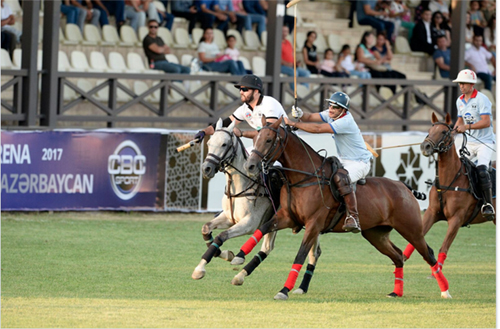 This year the tournament organisers Bahruz Nabijev of the Equestrian Federation of Azerbaijan Republic (ARAF) and Reto Gaudenzi and his team of Worldpolo present the CBC Sport Arena Polo World Cup in a new appearance with a significant bigger VIP area and new look.

In the first match of the day Team Improtex Motors/Grand Champions Polo Club (Palm Beach, USA) with Captain Melissa Ganzi, Tito Gaudenzi and the 7-goaler Juan Bollini found no rhythm and receipe against the strong Azeri team lead by the Argentinean coach Lala Laplacette. With a clear 11-5 the two opponents finishd the first match of the day. The match between Team Pasha Private Banking/Monte-Carlo Polo Team (Monte-Carlo, Monaco) and Team Azersun/Evviva Polo Club (St. Moritz, Switzerland) was more even and saw a tight 7-8 result in the end.

Speaker Jan-Erik Franck: „The Azeri team has played incredibly good. They have gone through a schooling process within the last years. And the hard work pays off now. While we saw them strong but still rough around the edges last year, they are now in a shape to enter any arena in the world and be a strong team based on their handicap. The American team could not find its rythm straight from the beginning. Melissa Ganzi played well, scored one goal and was involved in preparing others. In the second game we saw a tight fight, Team Pasha Private Banking/Monte-Carlo Polo Team (Monte-Carlo, Monaco) was chasing their opponents from the beginning. But Team Azersun/Evviva Polo Club (St. Moritz, Switzerland) with a very strong Martin Estrada did everything right: Timing, strategy and a perfectly precise teamplay made them the winner in the end.“

About polo in Azerbaijan
2013 the unique sport of polo was brought back to Azerbaijan, as one of its origin countries, where the traditional polo version Shovgan was played over the centuries. Since 2013 Bahruz Nabijev of the Equestrian Federation of Azerbaijan Republic (ARAF) together with World Polo of Reto Gaudenzi and his team create and set up this highly successful arena polo tournament. Thanks to General Elcin Gulijev, President of ARAF, and his visionaries of a new polo era in his country, the modern sport of polo was raised from zero to a remarkable international level in Azerbaijan during the last five years. After hosting the first ever FIP Arena Polo European Championship in 2015, the ARAF-Elite Horse & Polo Club now presents the 5. CBC Sport Arena Polo World Cup Azerbaijan. Following the huge success of the tournament, the vibrant city of Baku has been awarded for the FIP Grass Polo European Championship in 2020. Therefore two full-size grass polo fields have been built in Azerbaijan.

www.imagesofpolo.com
The photo is free of charge for editorial use. It is necessary to name the photo credit “Tony Ramirez/Worldpolo”
when using the photo.

Only the watermark pictures are free for Online and Social Media use.