Deauville International Polo Club : A tournament that keeps getting stronger 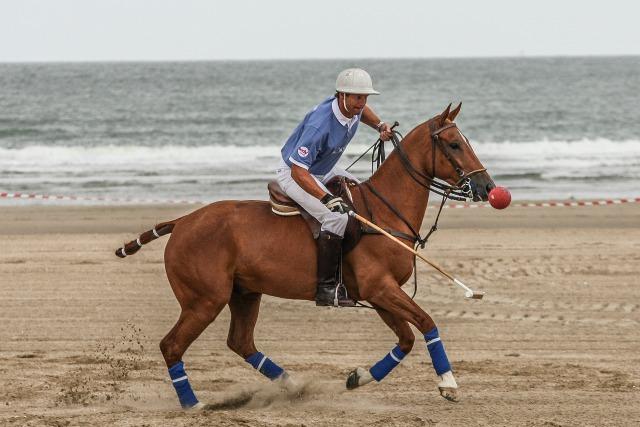 Deauville is definitely one of the most renown city of horse in France: races, sells, showjumping, dressage and polo, compose a rich equestrian agenda through all year. But Deauville is above all a seaside resort, a spot to relax and be well received. In this spirit, Deauville International Polo Club’s organizers have freshen the prestigious Gold Cup. The 67th edition of the Barrière Deauville Polo Cup will take place next August 1st to 27th.

Polo is a tradition in Deauville. You could see people “hit” the ball on the racecourse at the end of the XIXth century when polo appeared in Europe, imported from India by the British. The Polo Club of Deauville was born in 1907, and therefore will be celebrating its 110 years of existence in August.

It’s really in 1950 that the polo club set off with the creation of the Gold Cup by François André, founder of the Barrière Group. A tournament that all the great players and patrons of this sport envy to win. All legend champions have come here in Deauville, and for most of the time they have win : Adolfo Cambiaso, Heguy and Pieres families, Merlos’, Gracidas’, etc.

2017 will not be an exception to the tradition as the different teams feature four main headliners, among others: Argentina h9 Sapo Caset, h7 Francisco Elizade, but also h8 Juan Ruiz Guiñazu and Francisco Pancho Bensadon who will play with his son Rufino, 16, who represents the new generation to be impressive. Four players who have dominated the Abierto de Argentina. Tito Guiñazu, winner of the Gold Cup in 2015 and finalist in 2016, was noticed at the Argentinian top level last year when he reached the quarter-finals of the Abierto, qualifying for next edition.

Under the presidency of Jean-Edouard Mazery, whose team takes a unique care for conviviality, without neglecting the sport quality of the event, the Deauville International Polo Club has grown quite great reputation beyond national borders, such that the organization had to decline the request of participation from some teams; the Silver and Gold Cup can only present six teams and the Bronze Cup, eight. Besides, this year, the tournament begins earlier, on August 1st with the Silver Cup (16 goals), to ends on August 27th with the final of the Gold cup. One total month of polo!

Along with these prestigious tournaments, other main sportive highlights will be presented by the Deauville International Polo Club’s team: the Ladies Cup (ladies polo, August 9th to 12th), and the Bronze Cup (8 goals, August 14th to 25th). At least 22 teams are expected in Deauville this summer: 4 in the Silver Cup, 6 in the Gold Cup, 4 or 6 in the Ladies Cup and 8 in the Bronze Cup: a record. Some encounters will be played on the lovely rehabilitated field of Dozulé.

Beyond the grass.. three Beach Polo encounters are scheduled, to introduce this discipline to vacationers on the sand at low tide. These games, and all of those on grass are commented for a better understanding by the public who, in Deauville, is freely welcomed during the week.

In this idea to getting close to the public, there will be two team parades in the street of Deauville, August 12th, day of the Deauville Ladies Polo Cup finale and August 26th, day before the Gold Cup finale.

Thousands of spectators come each year to discover polo and cheer on the players.

Polo means also party, daily on the sides of the field at the racecourse of La Touques, where the public is always welcome at the prize giving ceremony next to the bar of the main welcome tent.

Other surprises will be the highlights of these three weeks of celebrating the oldest team sport in Deauville.