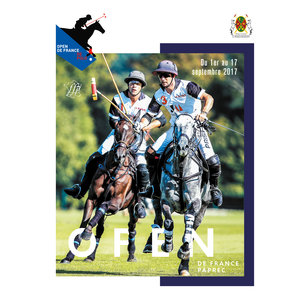 The 17th Open de France Paprec will kick off this weekend, with several new teams including young, impressive players from Argentina. Chantilly welcomed Facundo Pieres at 14 years old, with a handicap 4: today he is handicap 10 and one of the best players in the world. This edition will enable to discover future champions of the Pampa facing the French team in a very open tournament.

Two players from Albierto, 5 players from the French team, five young Argentinian phenomenons; 2 Chantilly teams, 1 Argentinian team, 1 Swiss team, and two from Western Paris, including a 100% French team: an exciting diversity for a Paprec French Open that will be extremely competitive.

17 days of competition at the Ferme d’Apremont which will be very promising. The Chantilly public will rediscover with delight the former semi-finalist of the Argentinian Open and ex-handicap 9, Pancho Bensadon. But he will have to share the limelight with another player from Abierto, Tito Guinazu (h7) as well as another handicap 7, Martin Aguerre Jr, who will defend the Open French title with his Swiss teamMarquard Media, finalist of the Golden Cup of Deauville last Sunday. A real challenge with a complete Argentinian team and leader, Cibao La Pampa, who has just won the Silver Cup/ Gold Cup of Deauville and who will attempt to earn the triple French Crown!

Those who have a blue heart will vibrate for Sainte-Mesme, an entirely French team with 3 players from the French team, Brieuc Rigaux, Clément Delfosse & Robert Strom as well as Birger, the father of the latter.

Chantilly will be supporting the teams of the club: Mochi Chic (Alexandre Sztarkman) (with two players from the French team, Florent Garaud and Pierre Henri Ngoumou next to Tito Guinazu) and In The Wings led by André Fabre. It will be particularly exciting to follow Rufino, the son of Pancho Bensadon, 15 years and handicap 3, who gave a fantastic performance in deauville, as well as Juan Zubiaure, 22 years and handicap 5, who is also part of the rising talent from Argentina.

Cibao La Pampa has also engaged for Chantilly two other young stars : Manuel Elizalde, le the brother of Fran, the main architect of the double success of the team in Deauville. Manuel is 23 years old and has a handicap 5; he will play next to another brother of the famous player, Carlos Ulloa (brother of h10 from Alegria, Hilario), who, at 20 years, shows a handicap 4. Thanks to the team Château d’Aulne, we will also discover the most amazing player – Camillo, son of Lolo Castagnola. The sons, Barto (16) and Camillo (14), handicap 6 and 4, will follow the steps of their father. All Pampa is speaking about them. Namely the youngest, « Jeta » (the surname of Camillo), that the audience of this 17th French Open Paprec will be able to discover. 14 years and handicap 4, astounding!

All this gives very complete teams; we will have to wait for the first matches of the weekend to get a glimpse of the potential winners.