Polo on the Rooftop of the world 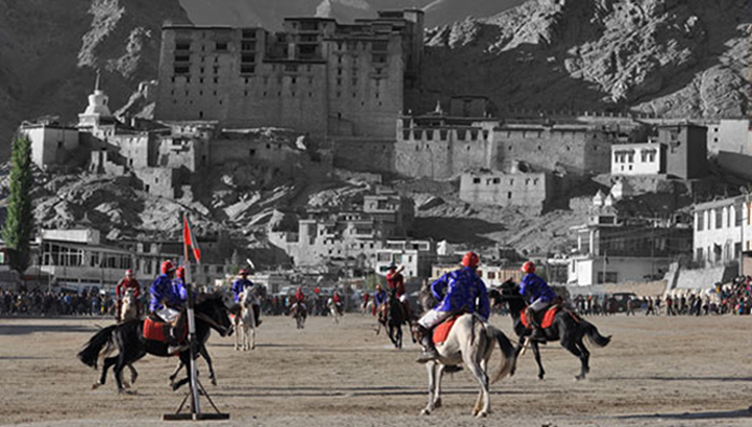 (…) By the 1870s British cavalry regiments were drafting the rules of modern polo. (The marquess) Curson (of Kedleston, Viceroy of India 1859-1925) feared the hill-tribe version would eventually be “anglicized out of all recognition”. Happily, it has not. Leh, capital of Ladakh, at the northern peak of Kashmir, north of the Great Himalayan range, hosts the Ladakh International Polo Festival, part of a larger annual arts festival in the first week of September. Could he but see it, Lord Curson would be astonished at the durability of the hill-tribe version. Nowadays six-a-side teams play 12 or 13-hand Zanskari ponies (otherwise all-purpose beasts of burden on peasant smallholdings). Each pony plays the entire game – two 20-minute halves with a ten-minute halftime break. And though! Not a single mount at the game’s end looked done for.

(…) Without the interruption of an umpire’s whistle, Ladakhi polo flows fast and furious. Apart from a goalkeeper at either end, forget positional play. Marking and passing the ball are random and spontaneous. If hill-tribe polo lacks the grace, discipline and tactical finesse of the modern game, it makes up for it in sheer exuberance.

As well compare classical ballet with rock n’roll. It is also often funny, if unintentionally so. Spectators provide much of the merriment. Each day of the tournament the sound of thundering hooves drew townspeople, peasants, Buddhist monks and Western backpackers to the maidan, the Indian equivalent of the European city square, a public space for everything from political rallies to concerts to folk dancing. And polo. From low stone walls and in the tiers of seats behind, spectators scramble for safety when players and ponies pursue an errant ball into the stands.

When play moves to the far end of the ground, they stream out onto it, retreating in disorder as it returns. As in days of old, kettledrums and hornpipes signal the start of play and goals scored.

Spectators in thousands cheer the long, lofted shots and explode in laughter at collisions and shots missed. For the last word on the Himalayan version, back to Lord Curson: “I do not pretend to compare either of these rather primitive types of the game (both in Manipur and the Hindu Kush) with the highly finished variety that may be seen at Hurlingham or Meadowbrook, any more than one could compare village cricket with a test match at Lords or rounders with baseball.

But the higher types would never have been produced or evolved had it not been for those hardy mountaineers preserving the traditions and maintaining the glorious spirit of the game through the centuries”.

Previous post:
Polo Wicklow: a special Club Next Post:
Why do we have to cut the horses’ manes and wrap the tails?