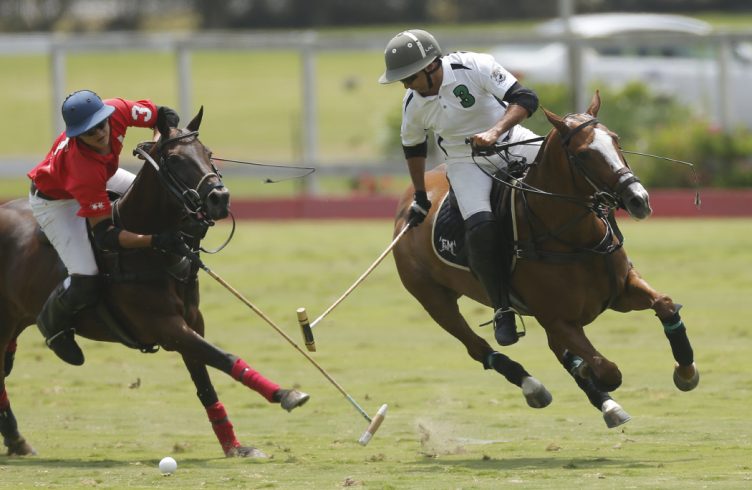 SANTA BARBARA, CA. (August 22, 2017) With three teams still in the hunt for the fourth and final semi-final position, competition was hot on the field for the final round of bracket play in the Gulfstream Pacific Coast Open. Fans across the country tuned in to see three fierce matchups courtesy of the live stream broadcast produced by Polo Network and the United States Polo Association. Klentner Ranch, Farmers & Merchants Bank and Lucchese began the day at 2-0, and a secure spot in the semi-final. Each of their opponents was forced into a must-win situation in order to advance.

The first match between Klentner Ranch and Sol de Agosto started off slowly, with only five total points on the board by halftime. Sol de Agosto took the early lead in the match, scoring the first two goals of the game. A goal by Geronimo Obregon for Klentner Ranch put them on the board, just behind their opponents, 2-1. A single goal by Geronimo Obregon in the second balanced the score at 2-2. Play continued to progress up and down the field, but neither team was able to convert. Jim Wright eased one through the uprights for his first goal of the match and the team’s third to give Sol de Agosto a slight lead going into halftime. Geronimo Obregon tied the score back up once again at 3 goals each late in the fourth chukker. Jesse Bray, for Klentner Ranch, perked up in the fifth chukker, cruising end to end, scoring two goals. A third by Obregon and a single goal by Jimmy brought the tally 6-4 in favor of Klentner Ranch. Klentner Ranch put some air in their mounts, scoring three goals from the field and a fourth from the penalty line. Caset converted a penalty two for Sol de Agosto to bring them up to 5 goals, but Sol de Agosto was unable to overcome the hot scoring streak of Klentner Ranch. Final score 10-5.

Santa Clara and Farmers & Merchants Bank were the second duo of the day to take the field. Lucas Escobar substituted in for his grandfather, Francisco Escobar. An evenly matched first chukker set the tone for the remainder of the game. Lucas Criado drew first blood from the field for FMB, but young-gun Joaquin Panelo answered back with a penalty shot conversion and a goal from the field to give Santa Clara a one goal lead after the first seven and a half minutes of play. Lucas Escobar played a tough game against older brother NIco Escobar, holding him from his usual scoring streaks, but he was able to slip away on one, adding to the FMB tally. Two costly fouls in front of the goal went in favor of Santa Clara, but a goal each by Felipe Vercellino and Criado once again evened out the score at four goals each. Santa Clara took the advantage in the third chukker, Luis Escobar scored twice from the field bringing their total to six goals. A penalty four conversion was all that came from the FMB crew before halftime leaving the score 6-5 in favor of Santa Clara. An evenly matched fourth chukker saw the score tied up once again 7-7. FMB came out hot in the fifth chukker with Criado scoring twice from the field and Dan Walker and Vercellino each adding a goal to the score. A single penalty conversion from Santa Clara pushed them forwards, but FMB commanded a three goal lead 11-8. FMB capitalized on their forward momentum, scoring twice more in the final chukker of play. Once again, a single penalty conversion gave Santa Clara a small boost, but they were unable to best the lead created by FMB. Final score 13-9.

With two matches down and the fourth semi-final spot still up for grabs, RH took a run against Lucchese, vying for that coveted final position. RH, the defending Gulfstream Pacific Coast Open Champions needed a win in order to avoid a three-way penalty shootout. Santi von Wernich took the ball to the goal on a quick pony for the first score of the game. RH showed tenacity on the offensive front, shooting on goal four more times throughout the chukker but they were unable to straighten their sightlines and convert. Lucchese took control of the field in the second chukker of play. Jeff Hall came out on fire, scoring three consecutive goals from the field. A fourth goal score on a penalty conversion by Jared Zenni was met by two penalty conversions made by Jason Crowder for the RH team, giving Lucchese the one goal advantage. Play flipped back in favor of RH, Soleimani, Coppola and Crowder each added to the tally while holding Lucchese scoreless giving them the 6-4 lead going into halftime. RH once again capitalized on their offensive momentum in the second half, scoring three more times from the pitch. A single goal on a penalty conversion by Lucchese left RH in the lead 9-5. RH foraged ahead, Coppola swiftly added another mark from the field. Augustin Obregon and Zenni fought to bring Lucchese back into the game and each scored, bringing it within three, 10-7. Two goals by each team in the final chukker of play left RH in the lead 12-9.