The 2016 USPA Maserati Silver Cup is off and running! 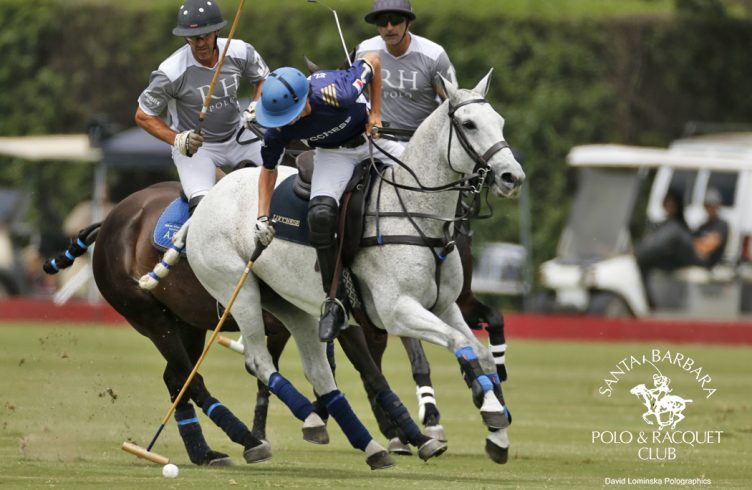 On a beautiful Sunday afternoon, Farmers & Merchants Bank broke open the tie with less than a minute remaining in the 3:00 match against Lucchese, scoring the winning goal off a free hit from the 30-yard line.

Joaquin Panelo of FMB spoke of the tight game, “It was fun playing against Lucchese, they are a very good team with fast horses and they play clean polo. It was a close and intense game. It felt like we were fighting for every ball and every goal.”

The spectators cheered as each team would hustle down the field fighting for each and every ball. 13 of the 19 goals scored came from the field making it a fast paced and exciting game.

FMB Too!/Sol de Agosto blew by Restoration Hardware earlier in the day at the morning match. Francisco de Narvaez continually proves to be an asset to the team’s offense, scoring 4 of the team’s 10 goals against RH on Sunday.

Though FMB Too!/Sol de Agosto proves to be a tough opponent, Klentner Ranch seemed to find the secret to beating the team during Friday’s face off. Justin Klentner kept a close eye on Francisco de Narvaez preventing him from scoring throughout the entire match. Klentner’s strong defense combined with the power of the Obregon/Bray combination helped lead Klentner Ranch to a strong win over FMB Too!/Sol de Agosto with a score 12-8.

With Jeff Hall sidelined with an injury during Lucchese’s Friday match against Restoration Hardware, the fate of the team seemed perilous. Santi Wulff and Nico Escobar stepped in for Hall and Muse, creating a forceful combination. The score remained close the first three chukkers of play, but Lucchese stepped up and dominated the fourth chukker. Badiola, Escobar and Wulff each scored on goal from the field and Krueger put two through the uprights to create a four goal lead for the team. The remainder of the game was low scoring, but the fourth chukker push sealed the victory for Lucchese 11-6.

Farmers & Merchants Bank will play Klentner Ranch on Wednesday, July 20 in the final round of bracket play. Placement for the semifinal round will be announced following the match.