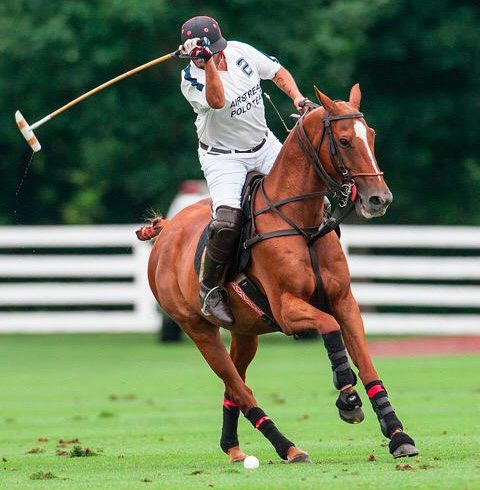 By Alex Webbe
Airstream (Benjamin Avendano, Matias Magrini, Kris Kampsen and Guille Aguero) spotted the 17-goal Postage Stamp Farm team (Annabelle Gundlach, Brandon Phillips, Nick Manifold and Joao Paolo Ganon) three goals by handicap in the opening round of play in the 2016 20-goal Butler Handicap at the Greenwich Polo Club but quickly made them up on their way to a decisive 14-6 win.
Kris Kampsen converted a 60-yard penalty shot for Airstream that was countered by a goal on a Penalty 1. Postage Stamp Farm held the lead, 4-1. Guille Aguero scored back-to-back goals to end the chukker with Airstream within a goal of the lead, 4-3.
Benjamin Avendano (playing in lace of Peter Orthwein) tied the game at 5-5 with the opening goal of the second period, 4-4. A goal from the field from Brandon Phillips returned Postage Stamp Farm to the lead, 5-4.
Third chukker goals from Kampsen and Matias Magrini were complimented by a swarming defense that held Postage Stamp Farm scoreless. At the end of the first half, Airstream edged ahead with a delicate 6-5 advantage.
Two more Airstream goals went unanswered as the second half got underway. Kampsen converted penalty shots from the 60-yard line and the 40-yard line. Once again, Postage Stamp Farm was unable to mount an effective attack as they fell behind by three goals, 8-5.
The Airstream machine continued to crank in fifth chukker action. Magrini scored his second goal of the day while two more goals from Aguero had Airstream breaking away with an 11-5 lead. Brazilian 7-goaler Joao Ganon kept Postage Stamp Farm from being shutout with the final goal of the period, but it was Airstream in control with an 11-6, five goal lead.
The last seven minutes of the game proved to be shooting practice for Airstream with Kampsen scoring his fifth of the day while teammate Aguero added scored two more for the 14-6 victory.
Aguero was high scorer for Airstream with six goals and earned MVP honors. Kampsen added five (three on penalty conversions); Magrini scored twice and Avendano was credited with a goal for the win. Phillips and Ganon each scored a goal for Postage Stamp Farm, who wilted under an oppressive Airstream defense. Postage Stamp Farm also received a goal on a Penalty 1 and three goals by handicap in the loss.
Brandon Phillips’s Perez, was named Best Playing Pony. Perez is a black six-year-old gelding out of the Los Machitos stables of Mariano Aguerre and Nick Manifold

White Birch 14, Tupungato 11
Earlier in the day White Birch (Santino Magrini, Hilario Ulloa, Mariano Aguerre and Peter Brant) continued to roll, winning the opening game of the 2016 Butler Handicap with a 14-11 win over Tupungato (Luis Rinaldini, Juan Martin Zubia, Naco Taverna and Tommy Biddle).
Tupungato received four goals by handicap from the 20-goal White Birch lineup, but with the expert play of Argentine 9-goaler Hilario Ulloa were able to get right back into the game in the opening period. Ulloa scored the first three goals from the field before Naco Taverna answered with a goal from Tupungato, 5-3. Ulloa closed out the chukker with his fourth goal of the day. Tupungato held the lead, 5-4.
The Tupungato defense stepped it up in the second period, limiting White Birch to a single goal from Mariano Aguirre. Tupungato was unable to score themselves and found themselves in a 5-5 tie at the end of the second chukker.
White Birch team captain Peter Brant opened the third chukker with his first goal of the game to for a 6-5 lead, but Tupungato continued to press. The two teams raced up and down the field but goals were hard to come by. A White Birch foul allowed Tupungato the opportunity to say in the game, and a 60-yard penalty conversion from Tommy Biddle tied it at 6-6 to end the first half.
The pace picked up in the second half. Three more goals from Ulloa were answered by single goals from Biddle (penalty goal) and Juan Martin Zubia. White Birch took the lead but Tupungato trailed by one goal, 9-8.
Fifth chukker goals from Brant and Aguirre had White Birch in the lead by three goals, 11-8, but Tupungato battled back. A pair of goals from Taverna ended the period, cutting the lead back to a single goal, 11-10.
Ulloa and Taverna exchanged goals in the sixth chukker with White Birch retaining their one goal lead, 12-11, but the momentum was with White Birch. Santino Magrini scored his first goal of the day, 13-11 and Brant’s third of the game had White Birch riding off the field with a 14-11 victory.
Ulloa led the field with eight goals on the day. Brant scored three times; Aguirre added a pair of goals and Magrini was credited with a goal in the win. Taverna’s four goals led the Tupungato attack. Biddle scored twice and Zubia added a goal for the win. Tupungato also received four goals by handicap.
Butler Handicap play is scheduled to continue at 4pm on Wednesday, June 29th when Postage Stamp (Annabelle Gundlach, Brandon Phillips, Nick Manifold and Joao Paolo Ganon) faces Northwood (Louis Bacon, Gonzalo Garcia Del Rio, Tomas Garcia Del Rio and Mariano Gonzalez).