Alejandro Moy: the potentate of the Argentine Polo pintors 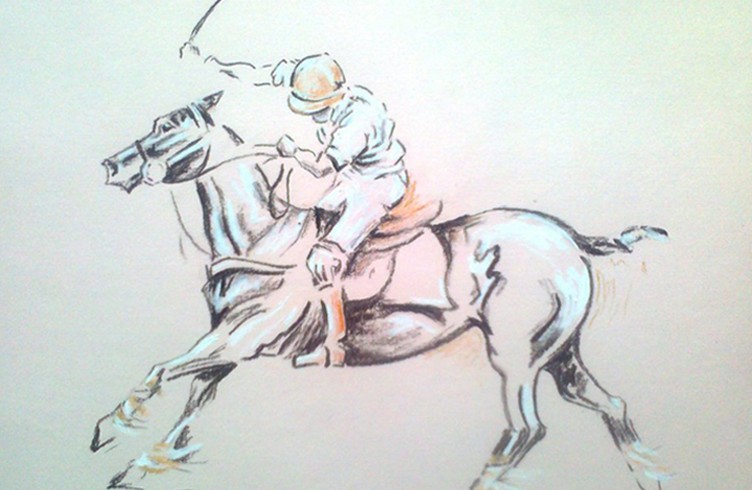 Given that Argentina reigns supreme in the global polo community, it should come as no surprise that it boasts artists who excel in celebrating the sport of princes. Only one, however, has become a household name in the polo world, and not only on home turf, but worldwide.

Only one, however, has become a household name in the polo world, and not only on home turf, but worldwide. The proud owners of Alejandro Moy polo paintings include The Duke of Edinburgh, H.R.H. The Prince of Wales, the Sultans of Brunei and Pahang (Malaysia), the Maharaja of Jaipur and the Australian polo patron, the late Kerry Packer, all of who played the game, and to whom must be added Chase Manhatten Bank, whose Moy artworks adorn its Visa credit card.

mong various polo bodies, and others, to commission Moy to paint pictures to promote themselves or their tournaments are the Argentina Polo Association (AAP), the Argentine Polo Breeders Association, the Federation of International Polo and commercial clients like the Desert Palm Hotel, Dubai, which recently ordered two large polo artworks, measuring 5 X 2 metres.
Since 1988, (the year, coincidentally, when the AAP first commissioned Moy to paint pictures for the cover of the annual Argentine Open), more than fifty exhibitions of his polo artworks have been staged at home and abroad, hosted by galleries, museums, hotels and polo clubs, the likes of Royal Berkshire and Beaufort (England), St Moritz (Switzerland), Sotogrande (Spain) and in the US, by Santa Barbara, Palm Beach, Houston, Connecticut and New York.

In 2007 the AAP Association commissioned Moy to draw up a plan to upgrade the area surrounding the world’s most famous polo ground and stadium seating 20,000 spectators at Palermo (aka La Catedral de Polo); a landscape garden and bitumen pathways, bars and covered stands promoting polo-related goods and services. To this walkway, where thousands spectators congregate before and after games, Moy has added contributed his own metallic sculptures in tribute to the polo pony.

Whether in ink, pastel, watercolour, acrylic or oil paint, you can identify a Moy artwork in nano-seconds. The hallmarks are its focus on horse and rider, fully stretched and in harmony; the lack of peripheral detail; the boldness and economy of line; and delicate brushstrokes reinforcing the aura of speed. In stature diminutive, in manner accessible and entirely lacking the hubris to which very successful artists are prone, by his own account he succumbed to polo’s siren call while still a child. Born in 1954, by the time he turned four he was already drawing horses. At six, he was watching polo with his father who also played the game and painted horses. “I started playing when I was still a kid,” Alejandro recalls. He graduated in architecture but soon realized its practice was not his true calling, and instead enrolled at the Buenos Aires art college to study drawing, in hope and expectation of paying his way in the world as an artist.

He freely concedes he was never cur out to play polo, yet his passion for the game persisted. “My vocation was painting and I wanted to channel this into my love of polo, of the horses, the horsemanship, the speed of the game,” he told Polo Players Edition. “As an artist I am still discovering new ways of expressing this and I don’t know where it will take me.”