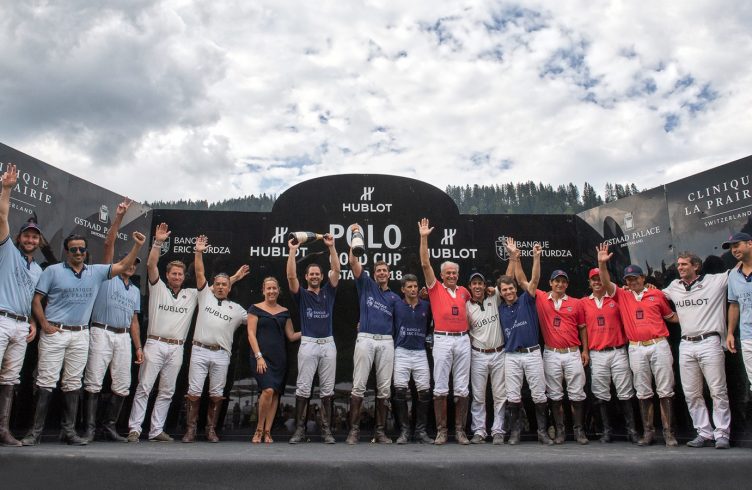 What a finale! Probably the most beautiful in twenty-three editions of the Hublot Polo Gold Cup Gstaad. Incredibly intense to the point that the audience (2000 spectators again) completely got caught up in game and greatly cheered from the sidelines. Although Cedric Schweri and his teammates of Banque Eric Sturdza were able to raise the trophy for the second year in a row, they truly had to fight for it.

It was more than a fight, it was a battle! Clinique La Prairie attacked very strongly to the point where one could wonder if the game was not going to be one-sided. In short, in the score, this resulted in a severe 4-1 after the first chukker with two goals scored by the one who would be crowned the tournament’s top scorer, the Argentine Agustin Canale (15 goals in the end, 5 average per game). Things got better in the second period, when Banque Eric Sturdza came back to 7-5. Notably thanks to Marcelo Pascual, author of lightning accelerations, brilliantly organizing the game of his team and scoring the two goals that would put the two teams to a tie in the last chukker. All there was left to do for Brazilian Joao Novaes was to conclude by scoring a 30-yard penalty giving Banque Eric Sturdza their second title.

The final, which will be remembered as one of the greatest of the Hublot Polo Gold Cup Gstaad, was preceded by the game for the third place easily won by team Gstaad Palace defeating team Hublot, 8-4. Pedro Fernandez Llorente scored four goals for the victorious team, while in the other team only Julio Novillo Astrada managed to score

Friendship is also the hallmark of this tournament, which has been presided for thirteen years now by Pierre Génécand who managed to turn it into a huge event, supported by renowned sponsors – including Hublot, Gstaad Palace, Clinique la Prairie, Banque Eric Sturdza and Ferrari among others – while keeping a friendly atmosphere and bringing together a nice audience.