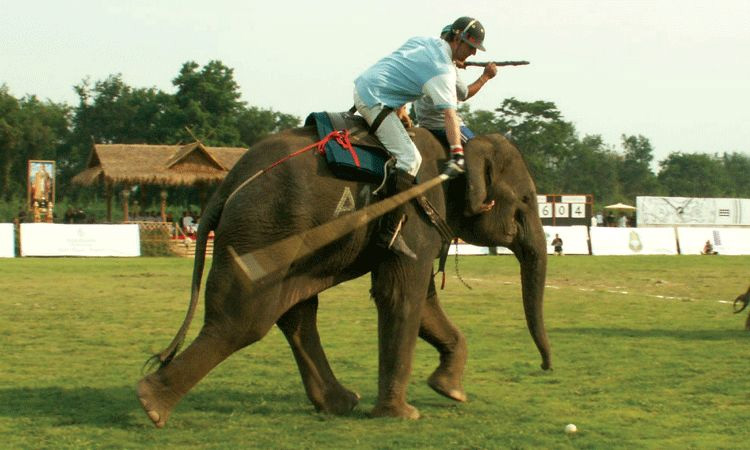 Over the years, some variants of Polo were created, some of them are very similar to the traditional way of playing, other are quite different and could even be seen as “exotic” from an occidental point of view.

The closest variants of Polo are: Arena Polo / Beach Polo, Indoor Polo and Paddock Polo. They basically follow the same rules: two teams on horses are fighting by hitting a ball with mallets made of cane. The size of the mallets depends on the size of the horse. The ball must go in the middle of the goalposts located at the ends of the rectangular field. Each player wears protections: kneepads and a hap with sometimes a steel facemask.

Traditional polo is played with four players by team. A game is divided in 4 to 8 “chukkers”, periods of 7 minutes. Between chukkers, the players change horses to let them rest. Indeed, accelerations, breakings and turns are very intenses. Two horses minimum are required for one polo player (playing four chukkers). A player will need 6 horses (or even 8) for high goal matches. The grass field is huge: 300 yards long and 160 yards wide. The ball is made of wood or resin and it has a diameter of 8.5cm. Polo season is usually in summer, horses rest and graze during winter.

Arena polo follows the same rules as polo but the field, smaller, is made of sand or dirt. The match is divided in 4 chukkers and the ball with a 12.5cm diameter, is made of leather. Arena polo is played with 3 players teams. The field is surrounded with sideboards of approximately four feet high, designed to keep the ball in play. In Arena Polo, the horses usually play only two chukkers. The players usually change pony between each game period.

Beach Polo is a very close variant of arena polo. A game of beach polo consists of two three-player teams playing for four seven minute periods of play (chukkers). It is played in an enclosed sand arena usually located on a beach.

As in Arena Polo, the field is surrounded with 4 feet high sideboards to keep the ball in play. Traditional polo ponies are used with players changing horses following each chukker. Beach polo uses the same ball as Arena Polo.

Rashid Al Habtoor (chairman of the Dubai Polo & Equestrian Club) and Sam Katiela have been credited with the creation of the game in Dubai in 2004, followed by the Miami Beach Polo World Cup in the United States in 2005. Additional tournaments and matches have arisen in Argentina, Australia, Austria, Belgium, Chile, Colombia, England, France, Germany, India, Italy, Mexico, Poland, Spain, The Netherlands and Uruguay.

Indoor polo follows the same rules as arena polo and the only difference is that the arena it is played in has a roof!

In Paddock Polo, each team is composed of three players that do not change horse during a match. Games are composed of two periods of ten minutes. The ball is similar to the arena polo ball. Paddock polo is practiced whatever the field and the season, it is played with ridding school horses trained for other disciplines such as dressage, jumping, etc.

Paddock polo, as an adaptation of polo for ridding schools, is a live-box offering numerous riders the possibility to discover polo and later, to play traditional polo. For instance, the France team that won the European champion in 2010 in Vienna started by playing paddock polo. Paddock polo also helps to maintain fourteen years old boys in riding schools while they usually leave them for other team sports such as football and rugby.

Paddock polo has been booming in France, there are around 1000 paddock polo players now. Spirit of Polo notably contributed to the creation and the promotion of the second biggest annual tournament of paddock polo in Valence, France. It gathers up to 24 teams and 3000 spectators. Numerous French universities have Polo/Paddock Polo teams and they are often invited to tournaments in Chantilly, Lyon or Aix en Provence.

Snow Polo is a modified version of polo. Games are played on a snow-packed arena surrounded by fencing keeping the ball in play.

Teams are composed of three players, as in arena polo. Play consists of  four 7-min chukkers. The horses are shod with special cleated shoes to  provide better traction. The ball used is made of plastic and much larger than the wooden/resine ball used on grass, and has a bright red color. All these characteristics were thought to prevent the ball from disappearing in the snow.

The sport of snow polo was first introduced in 1985 at the resort town of St. Moritz, Switzerland, one of the world’s most chic mountain resorts. The never seen event entertained several hundred of curious spectators.

The Snow Polo Cup of St. Moritz is competed during january on a snow covered rugby field. The snow polo is played with the same speed, intensity and excitement as a traditional polo match. In France, snow polo is played in Megève, Val d’Isère and various other mountain resorts. Italy, Germany, Austria, Chezc Republic and Poland also welcome some snow Polo tournaments. In the U.S., snow polo is competed exclusively in Aspen, Colorado.  In Argentina snow polo is also played; In Ushuaia but also in the Andes: in Las Leñas, Bariloche etc. For the past three years, a Snow Polo World Cup has been organized every year in the Tianjin Goldin Metropolitan Polo Club, in China.

Pony polo is aimed to 8 to 11 years old children ridding ponies smaller than one meter.

There are still a lot of other ways to play polo: ridding bikes, yaks, camels, elephants, segways or even golfcart!

The origin of Bike Polo dated from the end of the 19th century. This discipline was played on grass and targeted a younger and less fortunate public than the traditional polo one. This sport was officially named “bike polo” during its adaptation in bitumen and particularly increased during the 2000’s.

Bike polo is based on fixie bikes (without brakes and derails bikes), which firstly appeared in the United States. Indeed, couriers had this kind of bikes to work and were used to gather after work to race. From there was born the Bike Polo. After it popularity increased in the United States and in the United Kingdom, the bike polo arrived in France in 2007. At the beginning, this discipline was not successful. But with time, news generations found this sport more and more original, and the contrast between the elitist side of the traditional polo and the urban side of the bike polo gradually seduced a large public.

About the rules, they are simples and very few: 2 teams of 3 players; feet can not touch the ground when the player is touching the ball; a hand on the handlebar and ion the brake, the other hand is holding the mallet.

Elephant polo was first played in India at the end of the 20th century by members of the British aristocracy. It is considered the  biggest, weirdest, slowest, and most expensive game in Thailand.
The World Elephant Polo Association  was created in 1982 at Tiger Tops Jungle Lodge in the Royal Chitwan National Park, Nepal. The World Elephant Polo championships take place every year in Thailand and are composed of the King’s Cup Tournament, Nepal Tiger Tops Tournament and the Taprobane Trophy Elephant Polo Tournament in Sri Lanka.

The primary difference  between horse and elephant polo, besides the fact that it is played with an elephant and not a horse, is that above the elephants there are two people : the player and the mahout. In fact the “mahouts” drive the elephants, with verbal commands and by applying pressure to the back of  the elephant’s ears with their feet. The mahouts have generally worked with the elephant for many years and the elephants respond quickly to the mahouts signals and commands. So player’s responsibility is to let the mahout know where to go, how fast and when to stop while he is trying to reach the ball and play.

The Segway Polo is similar to horse Polo, except that instead of playing on horseback, each player rides a Segway PT on the field. The rules have been adapted from Bicycle Polo and horse Polo. Traditionally, two teams of five players compete on a grass field.
The first game played in the San Francisco bay area (the birthplace of the version of the sport played today) was on July 11, 2004 by five members of the Bay Area Segway Enthusiasts Group or BaySeg, The match was a 2 on 2 game and each time they played more people showed up. Soon after the official Segway Polo rules were written and the sport has enjoyed significant growth since.
But the first time some people played Polo with Segway was actually at a Minnesota Vikings halftime show in 2003.
Although not a major sport, Segway polo is gaining popularity and teams have begun forming in the United States, Germany, Sweden, Austria, Barbados and New Zealand among others. Some of these teams have started to compete against each other. The International Segway Polo Association (ISPA) has been established as the official governing body for Segway Polo.