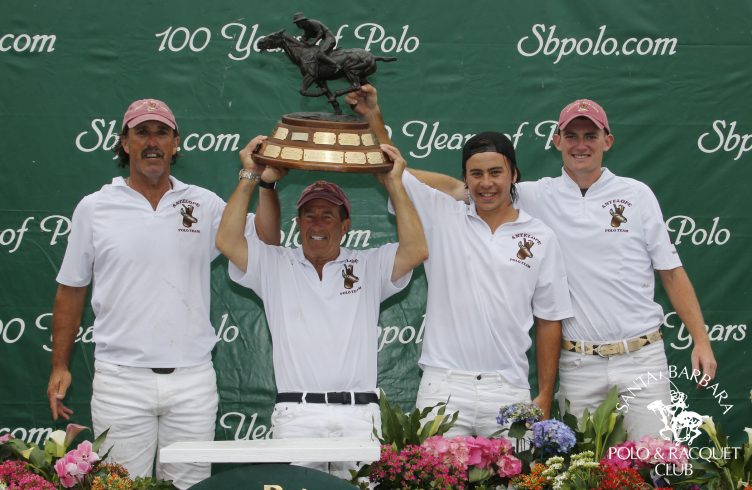 ‹ › ×
SANTA BARBARA, CA. (June 14, 2016) In what can be best described as a chess match on horseback, Antelope and Mokarow Farms fought their way through the final of the 2016 Engel and Völkers Polo Classic Final. The teams were so evenly matched that every play and every shot seemed to meet an opposing player or was halted by a whistle.

Felipe Vercellino created a small lead over Mokarow Farms in the beginning of the game by converting three penalty shots in the first chukker making the score 3-1.

Led by team captain Todd Offen, Mokarow Farms controlled the scoring in the second chukker. Unfortunately, an attempt to save a shot on goal bounced off a pony and into the Antelope team’s goal putting Antelope back in the lead by one goal at the end of the chukker.

Joaquin Panelo’s talent with the ball was evident as he raced up and down the field trying to put another tally on the board for the Mokarow Farms team. Jim Wright and Vercellino were hot on his trail deflecting his offensive attack and keeping a tight defense for Antelope. The teams sat down for halftime with Antelope holding on to their one goal lead 5-4.

The fourth chukker was a close reflection of the first half of the game, but in the fifth chukker Vercellino came alive on his little bay mare, “Bali.” Streaking down the field, Vercellino scored two back to back goals and pushed Antelope ahead by two. In the final five minutes of the game, Panelo converted a penalty and was quickly followed by a goal from the field by Offen.

When the pressure is on at the Santa Barbara Polo Club it seems that Santi Trotz is able to take back control of the game. Scoring a penalty and a goal from the field Trotz sealed the deal for the Antelope Polo Team.

Vercellino’s scoring streak in the fifth proved to be the boost needed for the Antelope team to win. “Bali” was awarded Best Playing Pony and team captain Santi Trotz was awarded Most Valuable Player.

“The 12 Goal in Santa Barbara is very competitive, but we also have a good time,” said Trotz following the game. “We had a great time playing against Kevin and his Mokarow Farms team. We were worried when they tied the game up in the sixth chukker, but we were able to come back and score two more at the very end. I am very happy with how Jimmy and Pipe [Felipe Vercellino] played. Jimmy has a good future as a part of Team USPA. I was very happy to play with him.”