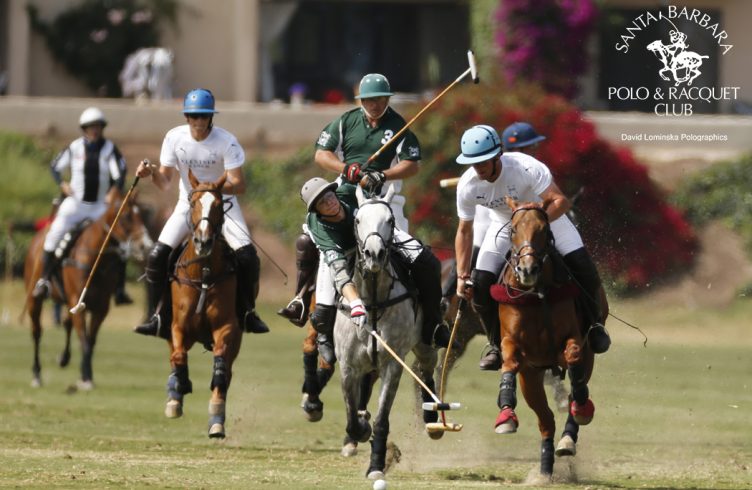 ‹ › ×
SANTA BARBARA, CA. (June 7, 2016) Mokarow Farms Polo Team announced their arrival to Santa Barbara for the June 12 Goal tournaments by defeating a tough Twin Palms Polo Team on Friday. The Dallas based team boasts a strong combination of players with Todd Offen (5), Joaquin Panelo (4), Rob Stenzel (3) and Kevin Mokarow (A). Offen’s ability to hit the long ball combined with Panelo and Stenzel’s short game was the key to their victory on Friday. However, they were unable to defeat the Antelope team in their Sunday match. Mokarow Farms faces Farmers and Merchants Bank, also with a 1-1 record this coming Friday.

Though Twin Palms fell to the new arrivals on Friday, they came back with a resounding victory against Film Finance in their Sunday game. Film Finance started with a one goal handicap and scored three quick goals in the first chukker to establish an early 4-1 lead. Twin Palms came roaring back only allowing Film Finance one goal in the second chukker and scoring three of their own. The Twin Palms defense held the opposition from scoring in the third, fourth and fifth chukker. At halftime the score was tied 5-5. Twin Palms pushed forward the second half scoring eight goals. The final score read 13-8 favoring Twin Palms.
Remy Muller had a standout game scoring four goals from the field. Bray added three more from the field and Wulff scored six goals from the penalty line. Following the game, Graham Bray expressed his displeasure about losing on Friday, “We couldn’t lose again and had to come back strong today. The first chukker we got caught in too many fouls, but by the second half we figured it out.”

After leading Antelope for five of the six chukkers, Klentner Ranch was caught flat footed against their opponent in the sixth chukker during their Friday match. It was a high scoring game on both sides. In the third chukker, KR scored seven goals to put them in the lead by five. Antelope answered back with six goals of their own in the sixth chukker to win 17-14.