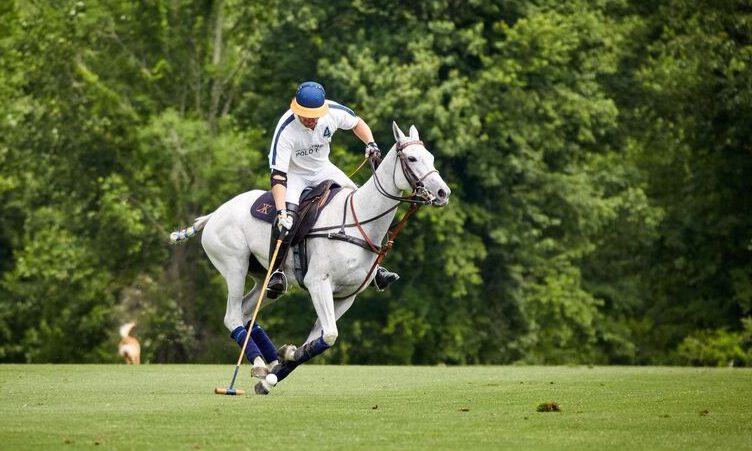 White Birch (Santino Magrini, Hilario Ulloa, Mariano Aguerre and Peter Brant) won their third straight game Sunday afternoon in the 20-goal USPA Monty Waterbury Cup competition and remained undefeated at 3-0, but it was no easy task. Both White Birch and Goose Creek (Maureen Brennan, Tomas Garcia Del Rio, Mariano Gonzalez and Marcos Garcia Del Rio) carried 2-0 records onto the field, scoring impressive wins in their two earlier contests.
Justin Daniels filled in for White Birch team captain Peter Brant, lowering the team handicap to 19-goals and giving them a one goal advantage to start the game. Mariano Gonzalez tied the game at 1-1 with a goal from the field for Goose Creek. Santino Magrini scored the only other goal in the chukker as White Birch left the field with a 2-1 lead.
Gonzalez added another goal to the Goose Creek total in the second period but Hilario Ulloa scored twice to extend the White Birch led to two goals, 4-2.
The two teams played evenly through the third chukker. Gonzalez and Ulloa traded goals that saw Goose Creek trailing by two goals at the end of the first half, 5-3.
Ulloa pushed the White Birch led out to three goals with the opening goal of the fourth period, 6-3, but Goose Creek battled back. A goal from Gonzalez, his fourth of the day, kept them in the game but White Birch was maintaining their two goal lead, 6-4.
Goals continued to be hard to come by as the fifth chukker got underway. Marcos Garcia Del Rio scored his first goal of the day, cutting the White Birch lead back to a single goal, 6-5. Justin Daniels countered with a goal for White Birch to end the period on top, 7-5.
Magrini’s second goal of the day gave White Birch a three goal lead, 8-5, but Goose Creek had no intention of rolling over. Gonzalez opened the scoring for Goose Creek in the sixth chukker, 8-6, followed by a goal from teammate Marcos Garcia Del Rio, 8-7. Gonzalez scored the final goal of the chukker as Goose Creek rallied for three straight goals, tying the game at 8-8 and forcing a sudden-death overtime, the first overtime of the Greenwich season.
After a brief intermission, both teams returned to the field on fresh horses ready to play on. Both teams battled for control of the ball with Ulloa finally taking charge in the opening minute of play and carrying the ball to the Goose Creek end of the field where he scored the winning goal, 9-8.
Ulloa led the White Birch attack with five goals. Magrini added two goals; Daniels scored once and the team received one goal by handicap for the win. Gonzalez scored a game-high six goals for Goose Creek with Marcos Garcia Del Rio adding two goals in a losing effort. The victory boosts the White Birch record to 3-0 with Goose Creek falling to 2-1.