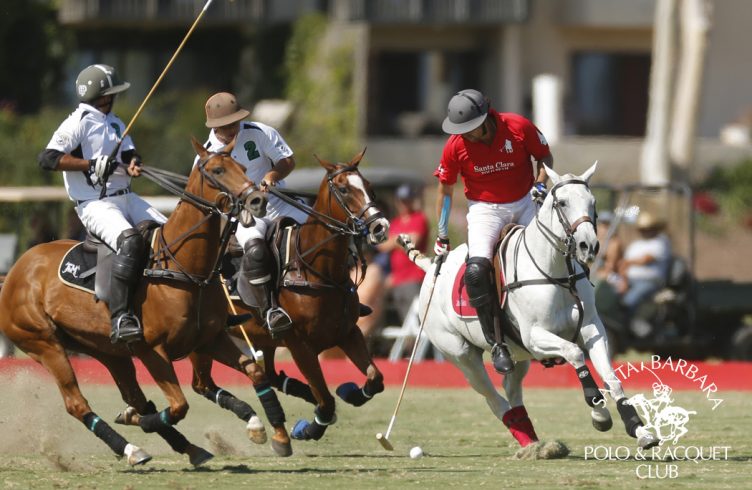 SANTA BARBARA, CA. (August 8, 2017) Three generations of Escobars took to the field at the Santa Barbara Polo Club for the Engel and Völkers Santa Barbara USPA America Cup with the youngest Escobar, Nico coming away with the win and the Most Valuable Player award.

Farmers & Merchants Bank made their way to their first final of the summer by swiftly defeating Klentner Ranch in a virtual semifinal on Friday afternoon. They took their place against Santa Clara who went undefeated in bracket play.

Three miscued shots by Farmers and Merchants Bank gave Santa Clara possession for the majority of the first chukker of play, but each team scored only one goal. The play continued at a furious pace in the second chukker. Vercellino converted a 40-yard penalty shot to push FMB up by a goal, but Obregon quickly answered with a goal from the field. Panelo drew next blood, scoring his second goal of the match for the Santa Clara team, putting them in the lead 3-2. Vercellino, determined not to finish the chukker as the underdog raced the length of the field and put his own tally on the board, tying the score at three goals a piece.

Santa Clara capitalized on missed shots by Farmers & Merchants Bank and took advantage of two penalties called in their favor. Luis Escobar sunk both penalty shots with ease, and took the lead 5-3 for Santa Clara.

Farmers & Merchants Bank took control of the ball early in the fifth chukker. Walker took advantage of the open field in front of him, scoring twice on long passes down the grass.

Escobar and Panelo took back control on the offensive front, each adding another tally to the board. Criado answered back on a quick pony to put FMB within one. Escobar scored the final goal of the chukker, giving Santa Clara a two goal lead once again.

Farmers & Merchants Bank went on a scoring streak, staging a solid comeback in the sixth chukker. Nico Escobar made the difference for the FMB squad scoring his first two goals of the match. A single goal by Panelo pushed back their strong offensive effort, but a penalty called in favor of the FMB squad gave them the advantage. Nico Escobar scored the tying goal, flipping the momentum in their favor. A tricky play on the boards gave FMB possession once again and they marched the ball down towards their goal. A scuffle in the goal mouth resulted in a stalled play, but Criado poked the ball through, claiming victory for Farmers & Merchants Bank.

Nico Escobar, the youngest of the Escobar clan and the MVP of the match was calm and disciplined against his grandfather’s team. “Winning the final was a great experience for me. Playing against my father and grandfather at the club I grew up at was mentally tough for me because of everything they have done for me. I challenged myself to focus and channel everything that I was thinking about and put it out on the field. [When play was tied] in the last minute, I was not nervous because we had just tied the game. We used that momentum to go and score the winning goal.”