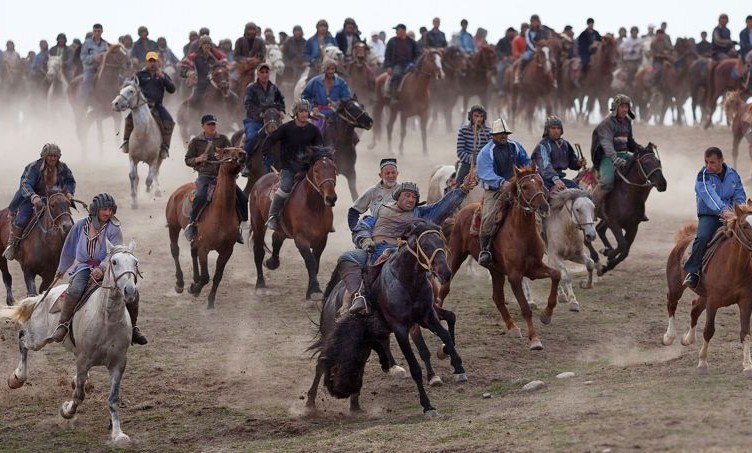 (…) Kazak players, mounted on small mountain ponies, lean down to seize the carcass of a freshly slain goat, gutted and headless. The player who seizes it tucks it under his leg as he gallops away. Opposing players try to wrest it from him. Team-mates, as in modern polo, try to ward them off. If the player in possession can circle the ground and return to throw down the carcass where play began, he is the hero of the hour. Once upon a time he would throw it onto the roof of a Yurt, the cylindrical cone-roofed tent of nomadic people all over Central Asia. Custom then required that the Yurt-dweller treat both teams to a banquet.

(…) The kazak people number 1.5 million, just over seven per cent of the population of Xinjiang, a potpourri of racial and ethnic groups bordering on India, Pakistan and several republics once part of the Soviet Union. Inner Mongolia, like Xinjiang, lies along China’s northern frontier, in this case bordering on Outer Mongolia, itself formerly part of the Soviet Union. Today, Chinese Mongolians account for ten per cent of Inner Mongolia’s 23 million people. What sets them apart from the other 30 minority nationalities is their history. To wit, Genghis Khan, a ruthless conqueror who forged Mongolia’s fractious tribes into a nation in the thirteenth century. With horse-borne warriors he founded the largest continental empire the world has ever seen, stretching from China to Adriatic Sea plus large slabs of Persia and Russia. (…) Latter-day Mongolians, funded by the Inner Mongolian and Chinese tourist authorities, celebrate their heritage in half a dozen annual week-long festivals in July and August. Once upon a time, two millennia and more ago, tribal chieftans convened what were called Nadams to mete out punishments and rewards to subjects, and to preside over bouts of martial skills contested by young warriors. Nowadays, Nadam festivals start with a parade of flags, speeches, homage to the spirit of Nadam through the offering of a whole roasted goat, rice and alcohol with incantations by a master of ceremonies, and with troupes of professional dancers, both infant and adult, strutting their stuff. In the week that follows, the so-called Three Games of Men archery,wrestling and horse racing are contested.