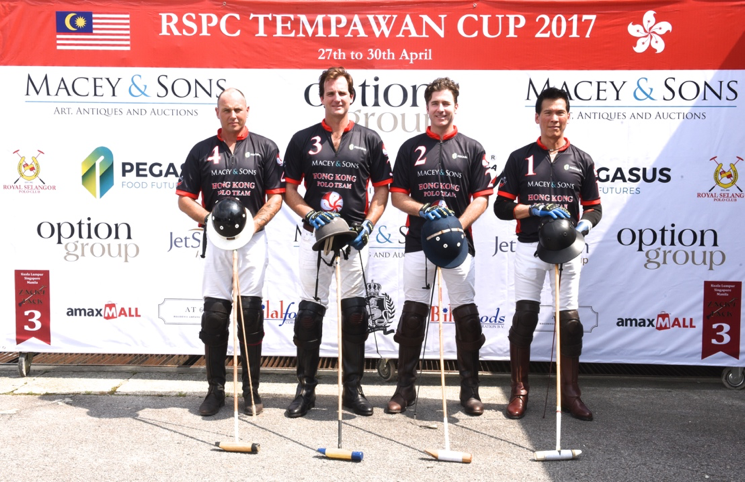 (Press release date: Sunday 30th April 2017) The Hong Kong Polo Team (HKPT) played against the national Malaysia Polo Team for the inaugural Tempawan Cup, in a grueling challenge at the Royal Selangor Polo Club in Kuala Lumpur, Malaysia. Taking place over two days, from Saturday 29th – Sunday 30th April, HKPT fought valiantly in the final, but the Malaysia Team proved to be a formidable force. Despite HKPT holding their ground and battling hard well into the 3rd chukka, they were forced to concede an early defeat at 2 minutes and 22 seconds when torrential rain forced the game into an early finish with a final score of Malaysia 9 to 4.5 HKPT.  Matt O’Leary of the HKPT was awarded Most Valuable Player and said that the team couldn’t wait to come back again next year to compete again for the Cup, promising to be bigger, better and stronger.

In spite the unfortunate weather, the 200 VIP polo guests and supporters enjoyed the game, along with a champagne reception and high tea. The day finished on a high note with guests gathered in the club to shelter from the rain and dancing the night away to the band “Freeze”.

The President of the Royal Selangor Polo Club, Y. Bhg. Dato Mohamed Moiz, gave testimony to a thrilling game and a ‘sterling performance’ by the HKPT. Promising to fix an annual MPT vs HKPT competition into the calendar.

Previous post:
World Championship play-off The French, beaten by La Roja…Setback? Next Post:
Ladies European Championship : France made it to the final!