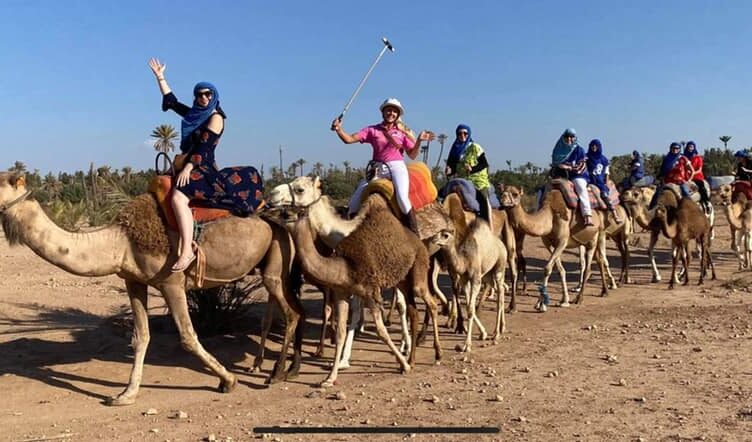 Rabat – A group of eight American Women Polo players of the American Polo
Association lead by its Commissioner Michael Farah enjoyed a week in Rabat
and Marrakech playing Polo and to commemorate “200 years of friendship” between the United States and the Kingdom of Morocco.

Members of the American Polo Association (APA), the premiere group promoting Women in “The Sport of Kings” around the world, visited Morocco to celebrate the 200th anniversary of the American Legation in Tangier as a symbol friendship between the two countries. Rabii BENADADA, the Governor for the APA in Morocco organized a four-day Women Polo event involving two teams, Hollywood, and Beverly Hills. The delegation has inspired the organization of the First Moroccan Women’s Polo Team.

The American Embassy in Rabat, Morocco greeted the American delegation the first evening at dinner with Cultural Attaché Stephen Weeks. Attaché Stephen Weeks personally gave a tour of The US Embassy exhibition, “Of Voice and Stone 200 Years of History in the American Legation Building and Morocco “at the National Library in Rabat. The exhibit features a range of historic items representing the political, security, economic, and cultural ties between Morocco and the United States- from a Lego model of the Mars Rover to Jimi Hendrix’s boots to Nawal El Moutawakel’s Olympic gold medal and track shoes. The exhibit even features a dress worn by pop star Lady Gaga.

“This exhibit tells the story of people-to-people relationships, of how ordinary Moroccans and Americans have accomplished extraordinary achievements together over the past years, decades, and centuries. Michael Farah the founder of the American Polo Association and former American Diplomat, Honorary Consul General said, “These achievements have left a permanent mark on our shared culture, in music, science, art, sports, a so many other areas.”

Throughout 2021, the US Embassy is celebrating US-Morocco friendship with a series of events promoting the strong ties between the two countries. One of the highlights of the trip was when Commissioner Michael Farah gave a speech of Good Will appreciation between the two countries and presented to the US Embassies’ Stephen Weeks an American Polo Championship medal. Michael Farah himself is an Honorary Consul General in the worldwide diplomatic community.
He has led numerous American Trade delegations throughout the Middle East.
In addition to playing Polo, the women went on camel rides, shopping excursions to the local markets in Rabat and Souks at the old Medina of Marrakech, as well as enjoying a traditional Moroccan dinner and folklore showing a quintessential Moroccan Riad, where the design and people watching was as delicious as the food, allowing the polo players to live like a local while in Morocco.

Polo, the oldest team sport in the world, as known as “The Sport of Kings” using a long stick (mallet) and a ball. The objective of the game is to score goals against the opposing team as in other team sports such as hockey, except that this one is played on horseback.

This was the start of a Worldwide Tour including events throughout the United States featuring Women’s Polo Teams traveling for charity and Good Will Tours.