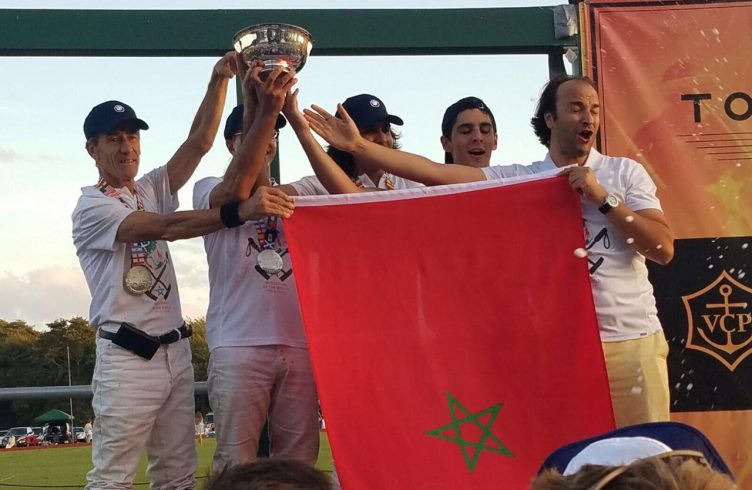 The first Moroccan Civilian Polo Team to ever play in the United States played an outstanding match on Saturday September 17 against Team USA at the historic Newport Polo Club in Rhode Island. Over 5000 spectators watched Team USA and Team Morocco play a fast hard fought game for six periods “chuckers”. The teams were tied in the first two periods with three goals for Team Morocco by their Captain Nouredine Anakar and Two goals by Team USA Captain Dan Keating and one goal by Heather Sousta. The second half of the match began with Team USA scoring 4 goals in a row and Team Morocco only 1 for a score with Team USA building a 3 goal lead, but in the fifth chucker Team Morocco played an outstanding period with Ali Mobtaker scoring 3 goals in a row and Anakar one for Morocco and Keating one for the USA for a tie 9-9 in regulation. The teams went into a penalty shoot out in Over Time and Team Morocco won the match 10-9. The spectators were treated to a fantastic Moroccan dinner with Moroccan music and belly dancers after the trophy presentations. Team Morocco and Team USA will play again next year in a rematch as part of the International Polo Series that Dan and Agnes Keating organize in Newport.

Before the match began the players onTeam USA and Team Morocco were introduced in a ceremony that included the raising of the Moroccan National flag alongside that of the USA and the playing of the national anthems of both countries. The match anouncer Mr Williams described the heritage of polo and horsemanship in Morocco and explained that the beautiful north african country has been one of the strongest allies of the USA with great stability and great leadership by his Royal Highness Mohamed the Sixth.