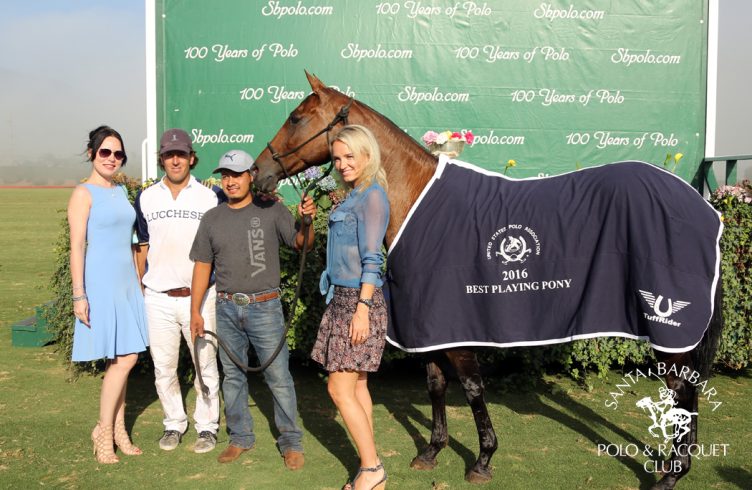 SANTA BARBARA, CA. (September 19, 2016) Klentner Ranch and Lucchese went head to head in the final of the 2016 President’s Cup. Spectators were treated to a fast paced and open match, with both teams holding a firm advantage at different points during the game.

Klentner Ranch has been undefeated thus far in the 8 goal fall tournament series. Lucchese looked to put an end to their streak with a strong lineup, Conrad Kissling, Trevor Nisnak Reeves, Santi Wulff and John Muse. The Klentner Ranch team, Jake Klentner, Dayelle Fargey, Jesse Bray and Justin Klentner, started the game with a one goal handicap and quickly jumped ahead scoring two goals in the first chukker. Santi Wulff scored one from the field for Lucchese to end the chukker with a two goal differential 3-1.

Lucchese held Klentner Ranch scoreless in the second. Wulff dominated the field aboard Best Playing Pony “Lorelei” scoring three consecutive goals to give Lucchese a one goal lead 4-3. Play remained even throughout the third chukker with the score settling at five goals a piece.

It was anyone’s game leading into the second half of play as the teams matched up evenly both on paper and on the field. The pace of the match remained quick and open as the fourth chukker began. Wulff scored two goals to Bray’s one goal giving Lucchese the edge 7-6.

Bray took control of the fifth chukker, scoring four unanswered goals. With a strong three goal lead, 10-7, Klentner Ranch felt confident coming into the sixth chukker, but the momentum swung in favor of Lucchese. Justin Klentner took a fabulous end to end run and shot to goal, only to have the ball bounce forcefully off the post back onto the field. Lucchese was quick to action, picking up the ball and scoring on the opposite end off of a penalty two. With the score now within two and plenty of time remaining, Lucchese took advantage of their forward momentum, Nisnak easily sent a ball soaring through the uprights to put them within one goal.

The thirty second horn sounded and the ball remained in play. With time winding down Jake Klentner took off down the field with the ball. An errant bounce put Lucchese back in possession with 15 seconds remaining and Wulff attempted to get the ball onto their side of the field. Bray caught the ball and sent it soaring out of play, cementing their win 10-9 over Lucchese.
Jesse Bray was named MVP and “Lorelei” played by Santi Wulff was awarded Best Playing Pony.