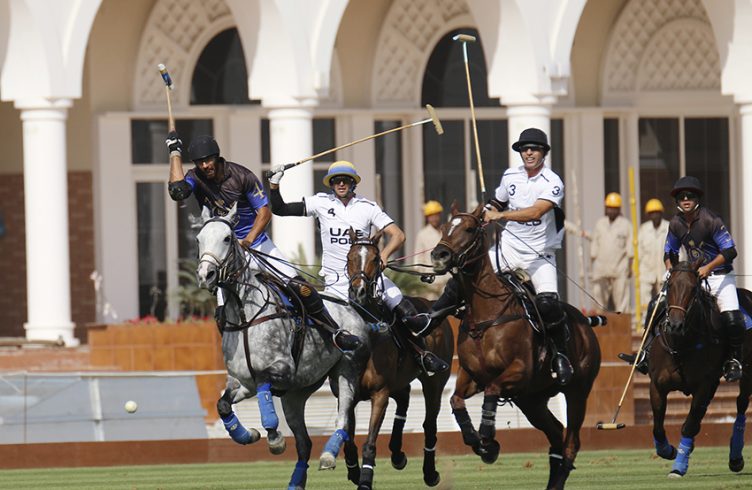 1st February 2017, DUBAI, UAE: UAE Polo and Desert Palm won today their respective matches for the semifinals of the McLaren Cup held at the Al Habtoor Polo Resort and will play the final of the McLaren Cup, first trophy of the Dubai Polo Gold Cup Series 2017.

Desert Palm defeated Habtoor in OT by 8 goals to 7 and UAE beat Bin Drai by 9.5 goals to 7.
With this victories Desert Palm will play against UAE Polo next friday the grand finale of the McLaren Cup from 3pm at Al Habtoor Polo Resort.

Casually Desert Palm and UAE Polo won in the semifinals by the same result they achieved in the quarterfinal matches, played last monday. Also, Desert Palm achieved their second victory in OT in a row.

In the first semifinal of the day, UAE Polo played a great game, and again, teamwork was the clue to defeat a tough Bin Drai foursome.
UAE Polo, made up by Ali Al Merri, Jack Hyde, Matías Benoit and Guillermo Terrera, played three chukkers (2nd, 3rd and 4th) at a very high level to leave Bin Drai without options to react.
Despite the two goals scored by Bin Drai in the last chukker, UAE Polo victory was insured and the deserved ticket to the final came with the 9.5 to 7 triumph.

In the second match of the day, Desert Palm and Habtoor Polo played a much even game with the control of the actions and the score divided for each side in almost all of the chukkers.
The equal opportunities they had took the game to an extra chukker. It was a penalty, from the 40 yards scored by Santiago Laborde, that gave Desert Palm the victory and the remaining place in the great final of the McLaren Cup.
Nicolás Pieres (Habtoor Polo) was the top scorer of the match with 5 goals and Alejo Taranco, with 4, the top scorer in the winning team.

The McLaren Cup final will be held next friday at the Al Habtoor Polo Resort from 3 pm with UAE Polo vs Desert Palm. From 1 pm, the Hildon Cup will be played between Mahra Polo Team and Zedan Polo.

The Dubai Open has been split into two tournaments. Starting with the McLaren Cup, which runs from Saturday January 21st, 2017 to Friday February 3rd, 2017. The second tournament, the Julius Baer Gold Cup, commences on Friday, February 18th, 2017 to Friday March 10th, 2017.

The Dubai Polo Gold Cup Series is the fourth-largest tournament of its kind after Argentina, the US and the UK. First founded by Mohammed Al Habtoor in 2009, the tournament is the premier regional polo competition of the year, and attracts VIPs, society figures, and senior corporate executives from across the GCC. It has grown in tandem with the city of Dubai and since 2012, it is the only tournament in the UAE to be recognized and certified by the World Polo Tour (WPT). It is played under the banner of the Hurlingham Polo Association (HPA), with the Gold Cup being played according to HPA rules and the provision of umpires is managed under strict international supervision by the HPA.

Mohammed Al Habtoor, Founder of the tournament and patron of the Habtoor Polo team said, “This year there are seven teams playing in the McLaren Cup and ten teams for the Julius Baer Gold Cup, further evidence that the tournaments continue to grow. The Dubai Open has helped put the UAE on the world polo circuit. Each year the competition gets better and better, and we attract some of the best polo players in the world.”
The participating teams will host some of the top-ranking World Polo Tour players, including Pablo Mac Donough, the 10-goal superstar and three-time ‘Triple Crown Champion with La Dolfina’; Nicolas Pieres, who was recently raised to 10 goals after his superb performance in the Argentine Open; Lucas Montverde (9-goal handicap); Alfredo Cappella Barabucci (9-goal handicap) Guillermo Terrera (8-goal handicap), and Ezquiel Martinez Ferrario (8-goal handicap) and many others, who have come directly from Argentine Open.
The Dubai Polo Gold Cup will be held at the Al Habtoor Polo Resort and Club, Dubai Land.