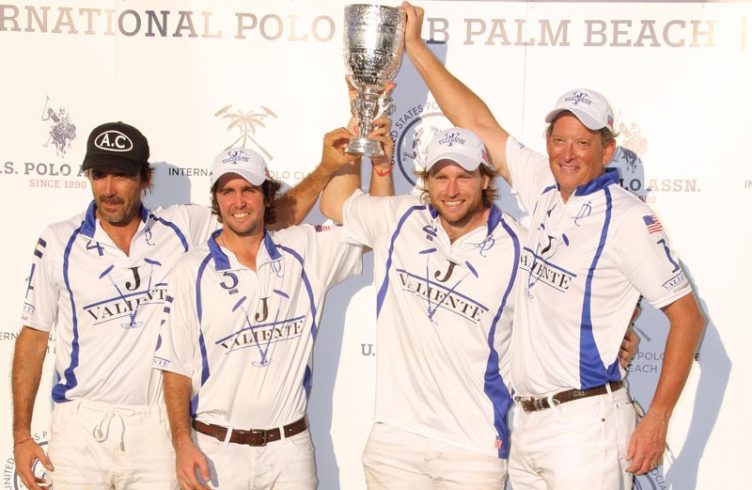 The final was exciting from the second the ball left the umpire’s hand to begin the game. Orchard Hill’s Polito Pieres took the throw-in and found Facundo Pieres on the end of a pass. Facundo bounced a shot in off the goal post to open the scoring less than 30 seconds into the game. After both teams traded penalty goals with Facundo converting a penalty 4 for Orchard Hill and Diego Cavanagh converting a penalty 2 for Valiente, 10-goaler Adolfo Cambiaso drove downfield with time expiring. Shooting at goal from approximately 60 yards out, the ball sailed over the inside edge of the goal post, narrowly missing a goal by inches. The smallest of margins was determining the outcome of the game between two highly skilled and well-mounted teams.

Orchard Hill exploded in the third chukker, outscoring Valiente 5-2. Orchard Hill converted 5 of 7 shot attempts as they looked to seize control of the game and gain a lead over a tough Valiente team that was set on making a comeback. The emergence of Polito Pieres for Orchard Hill was a huge factor. He had his best game of the season, highlighted by a first half that saw him score 4 of his 6 goals and win 6 of his game-leading 11 throw-ins on the day to give Orchard Hill a 9-6 edge heading into halftime.

Valiente showed why they were the highest-scoring team of the 2017 season to start the second half as Cambiaso scored off the first throw-in to cut the deficit to two goals.

Cambiaso wasn’t done there, as Matias Torres Zavaleta hit a perfect backhand to set him up for a breakaway and put a lot of pressure on Orchard Hill as their 3-goal lead quickly shrunk to 1 goal. Just as it seemed Valiente would keep scoring, Polito Pieres snuck up behind Cambiaso and stole the ball, springing himself on a breakaway to give some momentum back to Orchard Hill.

However, Valiente hit their stride and won the fifth chukker 2-0 to tie the game at 11. After Cambiaso gave Valiente their first lead of the game with his fifth goal of the game,

Cavanagh had a penalty 3 opportunity to extend the lead to 2 with less than three minutes remaining. Surprisingly, he did not convert, a rare miss for the 73% penalty shooter. Polito Pieres answered by taking a Facundo backhand and hit a cut shot from 40 yards out that just found its way inside the goal post to tie the game.

Seconds before the final horn Facundo Pieres caught Cavanagh on a turn near the Valiente goal. After a reversed call and a challenge, Orchard Hill had a penalty 4 opportunity. The ball sailed over the goalpost just wide, throwing the game into overtime.

After six chukkers Orchard Hill had shot a very efficient 11 of 15 (73%) from the field, while winning the throw-in battle 20-9, possibly giving them a slight edge heading into overtime. Both teams had their chances to end the game, with Facundo and Polito Pieres both making runs at goal for Orchard Hill while Cambiaso missed a goal by inches on a shot from 40 yards out. After the ball went out of play approximately 100 yards from the Orchard Hill goal, Cavanagh broke out of the back end of the line-up and ran to goal, putting the ball through for his seventh goal of the game to hand Valiente the 13-12 victory and the 2017 U.S. Open Polo Championship title.

Previous post:
Chantilly gets ready to welcome the best European teams! Next Post:
THE NEW SEASON OF POLO AT COWDRAY PARK POLO CLUB