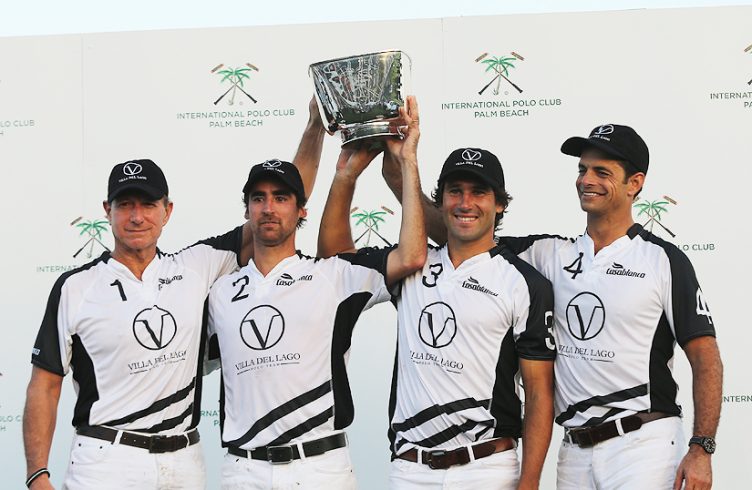 For the previous five years, Villa Del Lago fought their way into the club’s opening tournament final only to go away with a loss, but not this year.

In a sluggish opening chukker the two teams plodded through a defensively-oriented period, following a goal from Villa Del Lago 10-goaler Hilario Ulloa. Agustin Obregon made it 2-0 with the only other goal in the chukker as Villa Del Lago took the early lead.

Nine-goaler Mariano Aguerre opened the third period with a tying goal, but Ulloa responded with force. Consecutive goals from the field had Villa Del Lago in front by two goals, 6-4. Phillips scored on a pass from Annabelle Gundlach for the final goal of the chukker and a 6-5 score

Ulloa stretched the Villa Del Lago lead to five goals, 12-7, in the sixth with a 40-yard penalty conversion. The clock continued to run as Postage Stamp Farm tried to claw their way back into the game. Kampsen followed up a run by Aguerre with just 2:31 left in the game, and Aguerre scored on an impressive 90-yard shot for the final goal of the game in a 12-9 Villa Del Lago victory.

“The horses went great for me today,” smiled a satisfied Carlucho Arellano.

“Julio always says (Carlucho’s older brother) that he would rather have his horses at their best than the player,” said Margarita Arellano after the trophies were awarded.

Ulloa led all scoring with eight goals (three on penalty shots) and was named MVP. Arellano and Obregon scored two goals apiece for the win. Philips led the Postage Stamp Farm attack with four goals (two on penalty conversions). Kampsen scored two of his three goals from the penalty line and Aguerre added two goals in a losing effort.

Postage Stamp Farm team captain Annabelle Gundlach admitted to a being a little nervous in her 20-goal debut on IPC’s stadium field.

“I was really pleased with my horses today but can’t help but think of all of the things that I need to improve in my game. I had a great time today.” Surrounded by her mother and daughters, a smile crossed her face despite the loss.

Villa Del Lago and Postage Stamp Farm will have a short week as they are scheduled to play in the opening games of the Joe Barry Memorial Cup on Wednesday, January 4th. Villa Del Lago is slated to face La Indiana (Michael Bickford, Jeff Hall, Mike Azzaro and Ruki Baillieu) in a noon contest with Postage Stamp Farm taking the field against Coca-Cola (Gillian Johnston, Julian de Lusarreta, Julio Arellano and Del Walton) at 3pm.