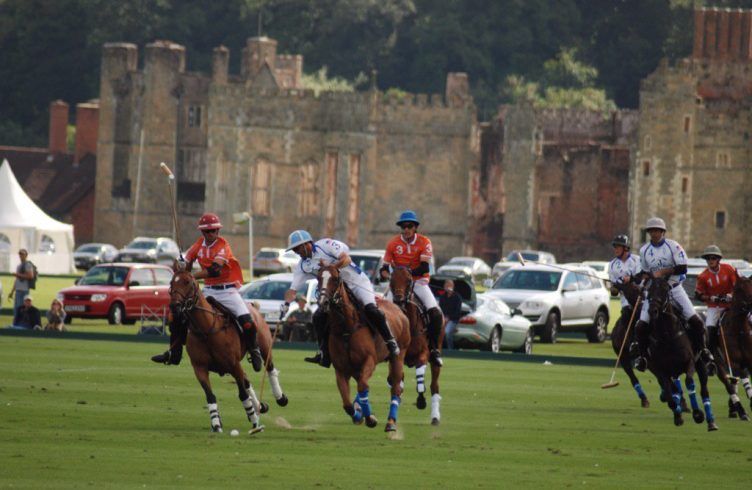 By Alex Webbe
HB Polo Team (Ludovic Pailloncy, Ignacio Toccalino, Pelon Stirling and Sebastien Pailloncy) made up for their opening Cartier Queens Cup loss to Talandracas (Edouard Carmignac, Pablo Pieres, Tommy Beresford and Sapo Caset) Tuesday afternoon in the opening game of the 2016 Jaeger-LeCoultre Gold Cup for the British Open with a 12-10 win.
Talandracas opened with impressive goals from Sapo Caset and Polito Pieres but 10-goaler Pelon Stirling quickly made his presence known. HB Polo struck back with Stirling and Ignacio Toccalino tearing up the middle of the field with the Pailloncy brothers (Ludovic and Sebastien) covering their flanks, front and rear. HB Polo finished the opening chukker with a 5-3 lead and seemed to dominate the talented Talandracas lineup.
Talandracas fought their way back into the game in the second period adding a pair of goals and holding HB Polo scoreless. After two periods of play the score was all even at 5-5.
The Talandracas momentum continued to build into the third chukker. Talandracas added three more goals while limiting the HB Polo scoring to two goals. At the end of the first half it was Talandracas with the 8-7 advantage.
Pieres made it 9-7 with the opening goal of the fourth but the HB Polo offense rallied. A penalty goal from Stirling was followed by a goal on a great individual effort by Ludovic Pailloncy who leveled the score at 9-9.
JB Polo outscored Talandracas 2-1 in the fifth to take the lead, 11-10 and then added a final goal in the sixth chukker while Talandracas unable to score in the 12-10 HB Polo victory and hoist the Carlos Gracida Cup at the end of the game.
A team effort by HB Polo was highlighted by the interaction between Stirling and Toccalino, but the Pailloncy brothers can’t be overlooked. Ludovic Pailloncy tied for the most goals by an amateur in Queens Cup play with brother Sebastien finishing in third place. Talandracas will have to recharge their offense as they prepare for their Saturday game against Apes Hill (George Hanbury, Mark Tomlinson, Eduardo N. Astrada and Alec White). HB Polo will try to make it 2-0 on Sunday when they face La Bamba de Areco (Jean Francois Decaux, Diego Cavanagh, Magoo Laprida and Rodrigo Rueda).
Valiente 12, Cowdray Vikings 7
In the second match of the day we got a look at Bob Jornayvaz’s Valiente polo team (Bob Jornayvaz, Ralph Richardson, Adolfo Cambiaso and Juan Martin Nero), comprised of two of the more esteemed members of the 2016 Cartier Championship Dubai polo team, !0-goaler Adolfo Cambiaso and 9-goaler Juan Martin Nero (though I continue to marvel at the fact that the HPA had the poor judgement to lower the Argentine 10-goaler’s handicap for the 2016 English season), and a recently organized Cowdray Vikings lineup (George Pearson, Chris Mackenzie, Jack Richardson and Alejandro Novillo Astrada). The Cowdray Vikings had a youthful look to it with George Pearson, Chris Mackenzie and Jack Richardson and the veteran hand of Alejandro Novillo Astrada. Valiente came in under the leadership of the top ranked polo player in the game today, Adolfo Cambiaso, supported by the best Back in the game in Juan Martin Nero. A talented Ralph Richardson and team captain Bob Jornayvaz rounded out the team, with the veteran lineup of Valiente taking the day with a comfortable 12-7 win.
The question remains, “When was the last time a player (or two) won the Queens Cup and the British Open on two different teams?”
Gold Cup play continues on Wednesday with a 1pm game between Zacara (J.J. de Alba, Lyndon Lea, Lucas Monteverde and Pablo Macdonough) and RH Polo (Ben Soleimani, Ali Paterson, Rodrigo Andrade and Nicolas Pieres) followed by a 3pm game featuring Clarke & Green (Nick Clarke, Juan G. Zavaleta, Luke Tomlinson and John Paul Clarkin) and Apes Hill (George Hanbury, Mark Tomlinson, Eduardo N. Astrada and Alec White).