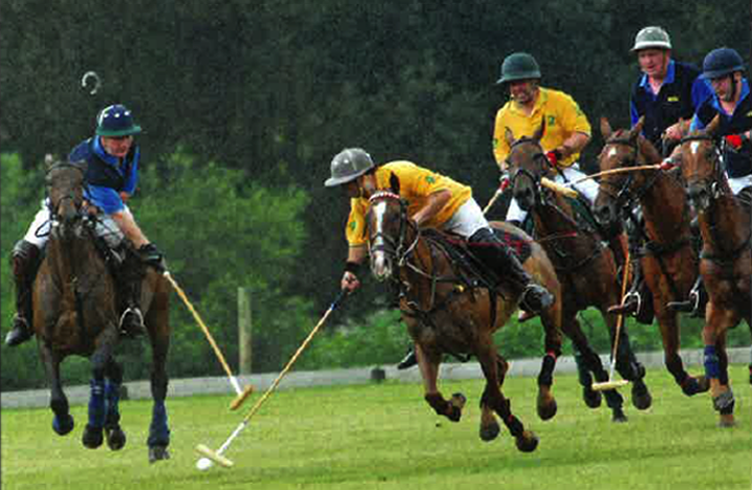 Question: what is the best way to promote your country to the world? The answer, surely, is to show other countries an activity, whether music, theatre, sport or whatever, in which your own country excels.

Six years ago the Argentine Embassy in Dublin launched an exhibition polo match, the Cup of the Argentine Republic, co-hosted annually with successive Irish polo clubs. Following the trophy presentation guests are provided with A Taste of Argentina, its wines, chorizo and empanadas together with a couple of professionals doing the tango–another activity in which Argentina excels.

This year in County Wexford, the most south-eastern corner of the country, the game was co-hosted by Bunclody Polo Club. The driving force here is Derek Hogg, local farmer and businessman. Born in 1927 of British parents in Argentina, following schooling in England, he returned to Argentina, his first love, where he played ‘fun’ polo with Coronel Suarez Club, hugely famous for its post-war 40-goal team of two pairs of brothers, the Heguys, Alberto Pedro and Horacio and the Herriots, Juan Carlos and Alfredo, to this day recalled as arguably the greatest Argentine team of all time.  In 1959 Hogg and his Irish wife Doreen, nee Peare, settled in County Wexford on part of the Peare family estate, where from poultry they progressed to breeding cattle and horses. The Bunclody Polo Club was founded in 2007 but, reflecting Ireland’s economic recession, its players are well down numerically from what they were. Argentine expatriate Alejo Aita Tagle, 37,with a 2-goal handicap, combines his role as club manager, organizing its five annual tournaments, with his own business, buying 3- to 5-year old Irish thoroughbreds, judged unfit for racing, and introducing them to polo and for sale to British, Portuguese and Spanish players. (See PPE, November 2011, Irish Thoroughbreds, Greet for Racing, Great for Playing Polo,).

The 6th annual Cup of the Argentine Republic saw two low-goal, evenly matched teams contest the trophy. Led by Alejo Tagle the Bunclody team faced up to Clohamon, also drawn from local players and named after a nearby hamlet. On paper, Bunclody was the clear favourite, a perception reinforced when Tagle Tagle scored the first goal in the opening chukker.  Irish weather is nothing if not fickle, alternating between sunshine and rain, measured not by the hour but in minutes. During that first chukker sun give way to rain. Play continued regardless but as the field grew slippery to avoid injury or accident of the game slowed. By the end of the four-chukker game, Clohamon had consolidated its half-time 3-1 lead, winning 6-2.

On the hillside above the polo-field some 200 guests had gathered, families of senior Irish government officials, local businessmen, members of the local chamber of commerce, townspeople of Bunclody after whom the polo club is named, club members and Dublin diplomats.
In her speech before the trophy presentation Argentine Embassy Charge d’Affaires, Minister Ana Pisano reminded us that of Argentina’s 40 million people, an estimated half a million had Irish forbears, making it the largest community of Irish descent of any country after the English-speaking world. Among the thousands of Argentines who have played polo since its introduction in the 1870s, she cited such h names as Cavanagh, McGuire, Donovan, Donnelly, O’Farrell, Rooney, Cullen, Hearne, McDonough and Lalor, adding that Luis Lalor has recently retired as president of the Argentine Polo Association.

For his contribution to Argentine polo she then singled out for special mention Gonzalo Pieres. The brevity required of a trophy presentation speech did not allow her to explore his legacy. Allow me to fill in the details: Gonzalo Pieres was born in 1956, the youngest of four brothers, sons of a lawyer in the town of Lobos, Province of Buenos Aires. When he retired from amateur polo his father bequeathed his eight ponies to his school-age sons who played each other two-a-side. Aged 14, Gonzalo played his first adult tournament and thereafter worked successively for two Argentine polo legends, Hector Barrantes and Eduardo Moore who instructed him in the business management of polo as well as the game.

Promoted to a ten-goal handicap in 1984, first with Lobos’ nearby polo club, La Espadana, then with Ellerstina, he won the Argentine Open eight times, while as captain and team manager with US polo patron Peter Brandt in the 1980s, and with Australian media magnate Kerry Packer in the 1990s, he led their teams to victory in many US or British championship tournaments.

To Kerry Packer’s 36-hectare Ellerstina Polo Club, an hour’s drive north of Buenos Aires, Pieres added his adjacent 60-hectare property. As a polo-pony stud, its progeny, whether foals or embryos, now command among the highest prices in the polo world. For his three sons, Facundo, Gonzalito and the youngest Nico, Ellerstina was the polo cradle where they learned their craft. In 2007 with their McDonough cousins, Pablo and Mathias, the two older Pieres boys, a 38-goal team, lost the final of the Argentine Open by a single goal to Adolfo Cambiaso’s 39-goal La Dolfina team. Last year 38-goal Ellerstina, Gonzalo’s three sons and veteran high-goaler Mariano Aguerre, 44, won the Argentine Open defeating 40-goal La Dolfina 12-10.

A second question: why, paying tribute to Argentines of Irish descent for their contribution to its polo, draw attention to Gonzalo Pieres, whose surname signals Spanish forebears? The short answer is that his mother was a Garrahan before she married his father, and is descended from a Patrick Garrahan who, 24 years old, in 1829 migrated from Ireland to Argentina.  Minister Pisano continued: “He married and had nine children. He bought sheep and cattle from livestock traders and eventually with his sons traded livestock in his own right. In 1874 his widow, Anne Garrahan, bought La Espadana, a 4,000-hectare ranch in Buenos Aires Province. Today La Espadana signifies the polo club named after the estancia, founded by Garrahan descendants in the 1930s…As a player, strategist or team manager, Gonzalo Pieres has been the most important figure in Argentine polo in the past 30 years …”

”Patrick Garrahan migrated from Co. Meath 30 years before the British discovered polo in India and forty yeas before the Irishman John Henry Watson of Co. Carlow, founded the All Ireland Polo Club, the oldest polo club in Europe. Neither Patrick Garrahan nor his son nor his grandson could have foreseen the impact of their descendants upon the game called The Sport of Princes.

”Today Argentina annually ‘exports’ hundreds of players, club managers, even grooms for several months to clubs all over the world, Ireland included. Since the 1924 Olympic Games when Argentina won the gold medal for polo, its first gold medal in any sport, it has dominated world polo.”  To Irish polo aficionados, quite as much as other guests watching the game for the first time, Minister Pisano’s speech, far from simply offering congratulations to the winners and commiserations to the losers, told a tale that came as news to everyone, as several there afterwards cheerfully admitted.