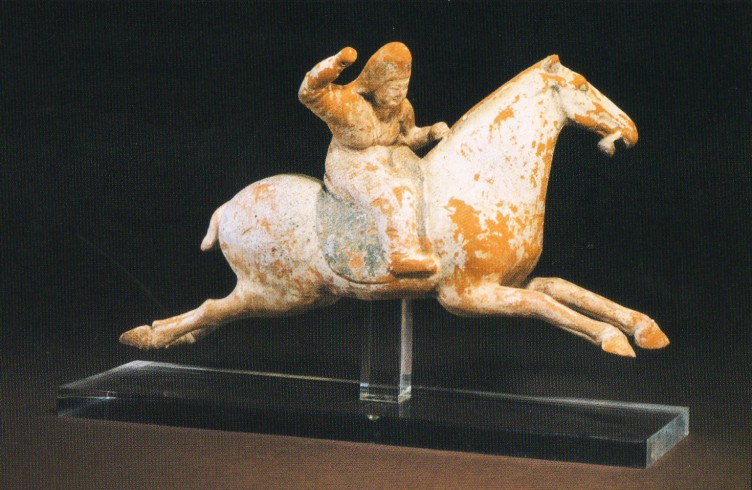 Medieval art from the golden age of Imperial China

Be it poetry, artworks or surviving polo grounds, everything points to imperial Persia, circa 500 B.C., as the genesis of polo, a court pleasure of the nobility and, as with other Asian empires in ancient times, crucial to honing the horsemanship of cavalry for mounted warfare. But who could tell you that under the Tang Dynasty (618-907 A.D.), a thousand years later, China became the world’s leading polo nation?

There’s no verifiable evidence but in all likelihood it was introduced to China by a Persian prince, Peroz, son of the last pre-Islamic Emperor, who fled his homeland in the 670s to settle in the Tang capital in Chang’an. This coincided with the first mention of polo in Tang China.

For this detail and much else, I am indebted to Bill Cooke, Director of the International Museum of the Horse, in the 1,000-acre Kentucky Horse Park. It was he who masterminded Imperial China: The Art of the Horse in Chinese History, one of the largest exhibitions of ancient artworks, sculptures and artifacts, some 350 items, ever to leave China.

Hosted by the International Museum of the Horse in 2000 for five months, occupying 10,000 square feet, costing $1 million-plus and attracting some 220,000 visitors, Imperial China spanned some 3,000 years of history from the Zhou Dynasty (1100-256 B.C.) to the Qing Dynasty (1644-1911). In its lavishly illustrated 160-page catalogue complementing the exhibition, Cooke described China for much of its history as the world’s most advanced and sophisticated society of its time. Historians of imperial China, spanning five kingdoms and a dozen dynasties, are agreed that the Tang Dynasty was its golden age, one of the great empires of medieval times.

Characterized by strong, benevolent rule for all but its last century, and buoyed by the prosperity from the Silk Roads, the capital, with a population of one million, was then the world’s largest and most cosmopolitan city, attracting merchants, scholars, clerics and envoys from India, Persia, Arabia, Syria, Korea and Japan. In Cooke’s words, “Chang’an was home to Muslim mosques, Jewish synagogues and Nestorian Christian churches. Buddhism flourished with temples, often supported by the state, located throughout the country.”

Hungary is credited as the first country in Europe to domesticate the horse, 600 A.D., but long after China dating back to at least 2,000 B.C. Whether in defense of its northern and western borders or to invade its neighbors beyond, whom the Chinese perceived as “barbarians,” the horse was indispensable, initially to draw its war chariots, later to mount its cavalry.

Founders of the Tang Dynasty, aristocratic families of the northwest had nonetheless inter-married with nomadic tribal peoples, conquered and assimilated, who brought with them traditions of horsemanship without equal in imperial China. What the Tang Dynasty never achieved, however, was a systemic, industrial-scale program of horse breeding. In its absence, most were bought at substantial cost from its “barbarian” neighbors to its north and west.

In her paper, Polo in Tang China: Sport & Art, (Asian Art, 1991) Virginia Bower wrote, “The most prized mounts for battle, hunting and polo were quite large, perhaps sixteen hands. They had a heavier body than today’s Thoroughbreds, yet their thin legs, agility and lively manner made them different from the present-day draft horses. A contemporary polo player was amazed that the heavy horses depicted in the mural in Crown Prince Zhanghuai’s tomb could be so nimble.”

According to Duan Xiaoqiang, history lecturer at the China Northwest Institute for Nationalities, in Lanzhou, Gansu Province, during the Tang Dynasty polo balls were made of wool and covered in leather while mallets were painted and with crescent-shaped heads, like hockey sticks, and several feet long. So long as the surface of a polo field was smooth and firm they could vary in size. Colored flags on either side of goal posts recorded each team’s score. Then, as now, polo had two umpires each of whom, in the Tang version of the game, carried a pair of red flags, which they waved, as umpires of the modern game blow whistles.

Supporters of opposing teams banged drums and blew trumpets, a tradition which persists in Himalayan hill-tribe polo to this day. As Tang Dynasty polo was played more for pleasure rather the need to win, polo equipment and the rules of the game were flexible. Sometimes a single goal might be erected in the center of the field to test each player’s marksmanship. Compared with earlier and, indeed, later dynasties, upper-class Tang Dynasty women enjoyed astonishing liberties, including hunting and polo with their menfolk, and like them, riding their horses astride.

According to Edward H. Schafer in The Golden Peaches of Samarkand: Study ofTang Exotics (1963), “An edict in 671 tried to outlaw brazen-faced equestriennes but it was ignored and by the 8th century, women were riding about the city [Chang’an] streets wearing Turkish caps or even bareheaded and dressed in men’s riding clothes and boots.”

According to Robert Harrist in Power & Virtue: The Horse in Chinese Art (1977), “The appearance of a foreign man and a Chinese woman together on a polo field would not have been considered a breach of propriety until later periods, when upper-class women were strictly separated from men who were not close relatives.” He added that the binding of women’s feet dating from the Song Dynasty (960-1279 A.D.) put a stop to playing such sports as polo.

In China under the Tang Dynasty as in imperial Persia, the horse was venerated in art, poetry and literature, a creature comparable with the mythical dragon in its power to bestow immortality upon its owner. According to a paper published in 1997 by the Silk Road Foundation, a Californian-based journal committed to Chinese scholarship, “Those qualities which had attracted Tang Emperors and others to the sport—the challenge of managing horse and polo stick simultaneously; the excitement of speed and the thrill of pursuit—inspired artists and craftsmen as well. Like related subjects of mounted hunting and combat, polo offered an opportunity to depict fine horses, skilled athletes and exciting confrontations. The sport was associated with the lifestyle of the elite…” Cooke insists, however, that Tang Dynasty polo was by no means limited to the elite. “The game was played not only by emperors, nobles and women of the court, but also by military men and scholars,” he wrote. “Age, whether young or old, also seemed not to be a limiting factor in participation. For those unable to afford or obtain horses, there were also versions played on donkeys or even on foot.” But nor did polo enjoy universal approval. “Not all within the court were proponents of the game,” he continued. “Some saw polo as a waste of valuable time and also felt it was a much too dangerous game for royal participation. The Tang Dynasty marked the apex of polo’s popularity in China … The game would survive into future dynasties, but never again would it be so popular or receive the royal patronage that it had during this period.”

While conceding that the horse was never fully integrated into Chinese culture by the lack of a large-scale breeding program, Cooke paid tribute to Chinese ingenuity in their invention of such equestrian items as the stirrup iron, the horse-collar and the breast-strap harness. Invoking the central theme of his exhibition, Imperial China, he added, “Also to their credit is the vast legacy of equestrian related artistic and cultural relics which we value and respect so much today.” Tang Dynasty polo artworks can be found over the Western world, including the U.S. National Museum of Polo and Hall of Fame, which illustrates this story as well as the International Museum of the Horse.

After its long absence, polo has returned to mainland China during the past seven years, led by the likes of the Nine Dragons Hill (near Shanghai), Metropolitan (Tianjin) and the Sunnytime and Tang Polo Clubs in Beijing. Federation of International Polo (FIP) spokesman for Chinese polo, U.S. FIP Ambassador Wesley Ru, believes, mindful of its huge population, that China will one day be among the world’s largest polo-playing countries. Not any time soon, however, given its clubs have yet to draw up a national list of registered clubs or players. The prospect of a Chinese Polo Association or FIP membership has some way to go. Only Hong Kong, to which Britain introduced polo during its 100-year lease, returning it to China in 1997, has secured FIP Provisional Membership.