Manipur, Craddle of the Modern Game 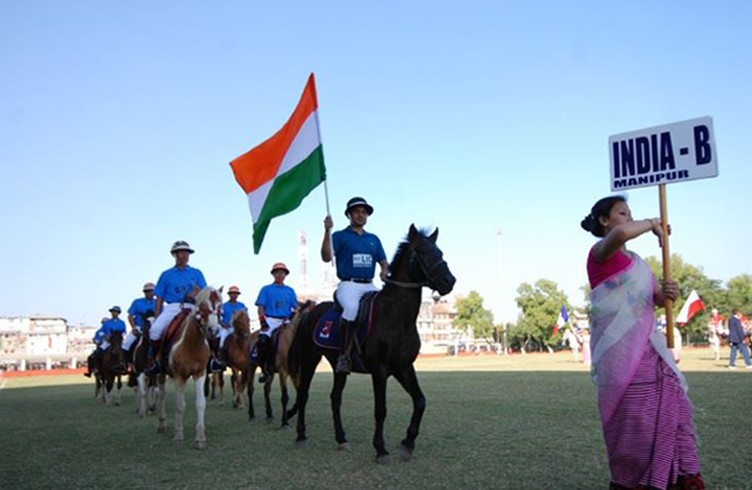 At the first glance, the notion of Manipur hosting an international low-goal polo tournament with teams mounted on diminutive Manipuri ponies is implausible. Manipur ? For centuries a sovereign kingdown, Manipur, in the northeastern corner of India, is one of the sub-continent’s smallest states, today with 2.3 million people.

And yet in the last week of Novermber, Manipur Horse Riding & Polo Association hosted a five-day low-goal tournament contested by sic polo squads from England, France, Germany and Thailand, together with another from New Delhi in addition to the Manipur team.

In the Manipur capital, Imphal, the venue was a polo ground called Mapal Kangjeibung, arguably the world’s oldest polo field still in play. On the far side from the official grandstand, a vast banner declared : WE GAVE THE WORLD THE GAME OF POLO. 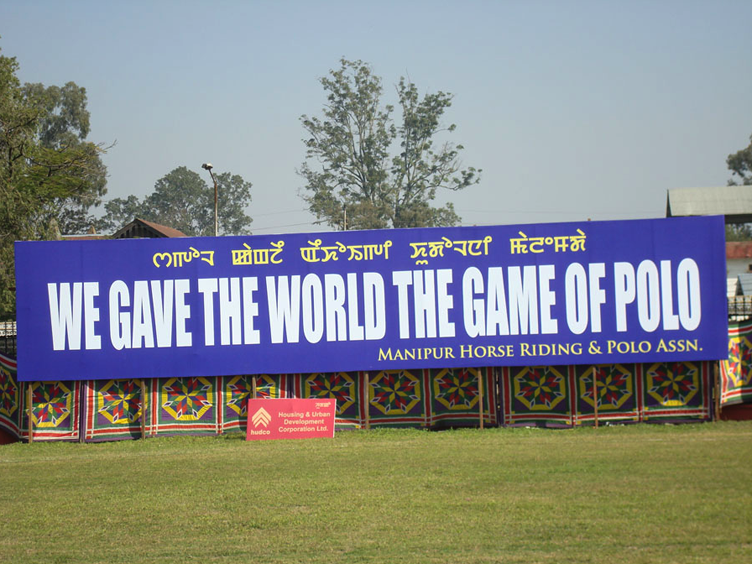 This boast is a bridge too far. In « The Evolution of Polo » (MacFarland & CO, 2009), polo historian Horance Laffaye, a member of the board of directors of the US National Museum of Polo and Hall of Fame, writes, « China, Iran, Manipur, Mongolia, Pakistan and Tibet all claim to the birthplace of polo … it can safely be assumed that it began as a simple folk game played by nomadic tribes in central Asia. Westward and eastward expansion followed, to Byzantium and China, most likely along the trail of the legendary Silk Road. »

Manipur folklore has it that the ancient version of its polo or sagolkangjei (literally, horse and stick, and played to this day) began nearly 4,000 years ago. As one of the authors of the tournament’s 60-page souvenir booklet acknoledges, the game and the polo pony « … have been an integral part exclusive to Manipuri civilization, its culture and nation building, diligently written down in manuscripts … The Pony is symbolized allegorically as the fountain of the creation of man himself … The handle of the polo mallet symbolizes the phallus of the creator and its intrusion into the head of mallet represent the union of the Gods and the act of Creation. The polo ball represents the sperm of Asiba (the first son of the creator of the Manipuri kingdom) and game of creation is played on the womb of Mother Earth. Sagol Kangjet or Manipuri polo therefore symbolizes the procreation myth and thus has to be played with the utmost sanctity… »

Yet according to Lt. Col. (Rtd.) Ranjit Singh, Vice-President of MHRPA and principal tournament organizer, hard evidence of the Manipur kingdom taking up its own version of polo, sagolkangjei, has it concurrent with the advent of Christianity. Far from a game played simply as a court pleasure, humble subsistence farmers also played sagolkangjei. In medieval times, the Manipur cavalry commanded the fear and respect of neighboring kingdoms both for their horsemanship, as well as the bravery, stamina and agility of its ponies.

But if Manipur polo began long after the mythic version, no polo historian disputes its contribution to the modern game. As the 19th century unfolded, British-rules India established relations with neighboring kingdoms rules u Indian princes. British army officers, starting with Captain Robert Pemberton in 1835 and followed by William McCullock in 1840, were the first Britons to witness and describe Manipuri polo.

Thereafter, Captain Robert Stewart and Lieutenant Joseph Sherer (credited ever after as the father of English polo), joined local British tea planters in impromptu games of sagolkangjei. In 1859, supported by expatriate Manipuri princes in neighboring Assam, the two officers founded the first modern polo club, and in the early 1860’s introduced the game to Calcutta from where it was swiftly adopted by the entire Indian subcontinent, from British and Indian cavalry regiments to neighboring princely states. 1869 saw British cavalry teams play the first impromptu game in England, where the rules of modern polo were drafted, following which, in the 1870s, it was promoted to the world at large. Thus was sagolkangjei the very cradle to the modern game.

For two millennia sagolkangjei was central to Manipur’s sense of its national identity. From the mid-20th century, however, when it was unwillingly absorbed into the newly independent state of India, its polo has declined . Its new political masters in New Delhi had no sympathy for the practitioners of a game associated with royalty and wealth, whether in India or further afield.

Rough polo is now resurgent in India as a whole, in Manipur the decline continues. A recent survey estimated the pony population at less than 1,000 and forecast its ultimate extinction. Why ? According to the souvenir booklet, the once abundant grasslands that substained the pony are now largely converted to growing rice and other cash crops. Ponies straying onto cropland now risk the wrath of subsistence farmes indifferent to ther plight, including mutilation and death.

Again, a culture which once celebrated sagolkangjei as central to affirming Manipur manhood has been supplanted by other sports. The dozens of community polo clubs it once boasted have been reduced to 10, each supporting some 10-15 active players, about 300 in all, each with two or three ponies.

Central to the challenge of checking and reversing the decline of Manipur polo, whether sagolkangjei or the modern game played elsewhere in India, is the MHRPA, composed of dozens of volunteers, largely based in the capital and otherwise typically employed in commerce, industry, the professiors or the Indian army.

According to the souvenir booklet, « These are selfless people who themselves finances the club and proudly mobilize resources from their community … These people are not millionaires … they have some money and time to spare (but) find that their enthusiasm and zeal are not enough to sustain the ever-rising costs of running a polo club ».

To halt and reverse the waning Manipuri pony population, the MHRPA, supported with some government funding, has established a stud outside Imphal of 40 mares annually bearing some 30 foals. Welcome as are sales of some of the progeny, with buyers paying at least $600 per pony, it is not enough for the stud to pay its way.

To encourage foreign teams to contest the 2012 low-goal tournament, and by so doing draw the attention of the global polo community to the plight of the Manipur pony, the MHRPA enlisted to its cause Nicholas Colquhoun-Denvers, the former chairman of England’s Hurlingham Polo Association and current Deputy President of the Federation of International Polo.

In his appeal to the global polo community, he declared « … it seemed to me that it was about time that the polo players around the world who have had so much enjoyment from the sport over the years should now give something back, a little to those who gave our forefathers the fame we all love so much ». (Those who read my article, Polo Poets : Poems From the Cradle of Modern Polo, Polo Players Edition, August 2012, will recall how Colquhoun-Denvers, under the pen-name Archangel, wrote The Manipuri’s Gift, which reads in part :
« The land of the Viceroys’times has changed,
And Great Britain is no longer so great
But the gift freely given with an open heart
Attests to a different fate.
As armies shrink and forests fall
And the past lies there in decay,
The game that was once the province of Kinds,
Is now there for all to play »)

The November international is the sixth such event hosted by the MHRPA since 1991. With a single practice chukka before the tournament began and all mounted on Manipur ponies between 11- and 13-hands high, guest teams were handicaped as they tried to master the local version of modern polo.

One British player, well over 6-feet-tall, told me after his first game, « I haven’t ridden a pony this small since I was 12. In the interests of fair play, at halftime teams exchanged mounts with one another. The home team, Manipur predictably ryed the roost, defeating New Delhi 15-5 in the final.

Leading the Thai team, otherwise composed of teenage or 20-something Thai players, was 5-goal Federico Bachmann, dividing his working life between his home in Argentina and Thailand’s Pattaya Polo & Equestrian Club. He compared riding Manipur ponies to driving a T-model Ford, which he reveres as the world’s first assembly-line automobile. « We know they (Manipur ponies) don’t stop, they run and they don’t turn but we didn’t come here to win, » he explained. « We came to experience something of what polo once was. This tournament helped me to appreciate how polo began, how much the horses have improved and how the game has improved. It’s amazing to think what polo was and what it has become ».
Find our article “At the pursuit of the Manipuri poney”