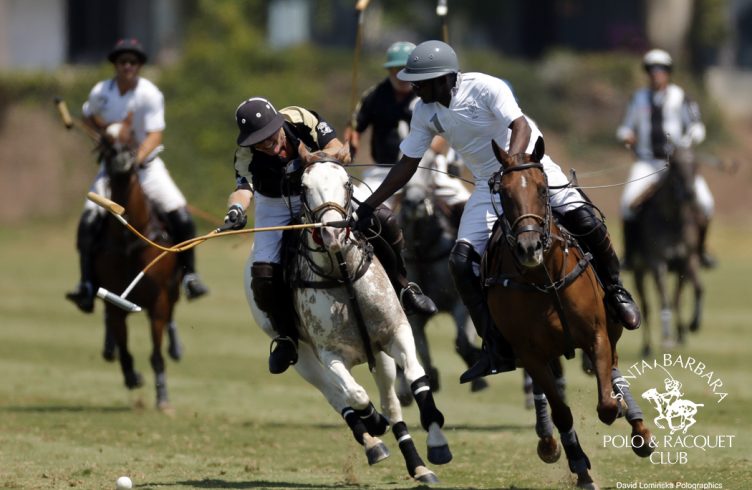 SANTA BARBARA, CA. (August 22, 2016) The race for the Gulfstream Pacific Coast Open has been whittled down to the Final Four. After completing three bracket games, the top four teams now advance to a semifinal round on Friday, August 26th.

FMB Too! def. SD Farms 11-8
FMB Too! And SD Farms both entered the final round of bracket play with an 0-2 record. Since this match was the first of the day, it created a must win scenario for both teams to have a chance at a shootout later in the day, depending on the results of the other game.
After narrowly losing to FMB in overtime last week, FMB Too! displayed a renewed sense of vigor. Taking an early lead in the first half of play helped establish a rhythm for the team.
On the opposition, Sayyu Dantata of SD Farms, controlled the scoring for his team, putting two points on the board in the first two chukkers of play. A goal by each team in the third chukker brought the score to within one, 4-3 in favor of FMB Too! at halftime. F. de Narvaez, Vercellino and P. de Narvaez fought hard offensively throughout the fourth chukker scoring a goal each from the field. In what can best be described as a “wall of defense,” Henry Walker remained disciplined with the man, preventing SD Farms from scoring in the fourth, bringing the tally 7-3.
SD Farms staged a comeback with two goals from the field and a third from the penalty line early in the fifth chukker, but FMB Too! answered back with two goals of their own, maintaining their lead. The sixth and final chukker saw an even two goals scored by each team, putting the final score 11-8 in favor of FMB Too!

Klentner Ranch def. RH Polo 16-7
The second game of the day gave spectators a glimpse into a group of young up and coming players. With the average age of the professionals hovering around 26, the match displayed the power of youth.
Coming off a tough defeat to FMB, the Klentner Ranch team found their groove and returned to an open style of play. Defeating RH Polo secured their spot in the semifinal round with a 2-1 record. RH Polo also qualified for the Friday semifinals with a 2-1 record.

Farmers & Merchants Bank def. Lucchese 10-9
The outcome of the final game of the day loomed over the players as they waited in anticipation to see who would be the fourth team in the semifinals. Lucchese went head to head with Farmers & Merchants Bank, tying four of the six chukkers. Lucchese edged ahead of FMB in the fourth chukker as Hall expertly scored two penalty threes, bringing the score 6-5 in favor of Lucchese. Chukker number five proved to be the determining factor in the match. FMB pushed past Lucchese with three goals to Lucchese’s one goal, 8-7. The game was within reach for both teams. FMB was already guaranteed a spot in the semifinals, but for Lucchese, this was a must win situation. Each team scored two more goals in the sixth chukker, giving FMB the victory 10-9.

Shootout FMB Too! Vs. Lucchese
After losing to FMB, Lucchese found themselves tied in record with FMB Too! each with one win and two losses. Since the teams had not played each other, a shootout was used to determined who would advance. Felipe Vercellino scored both his 40 yard and 60 yard penalties to clench the spot for FMB Too!